10 Brazilian Songs for Working Out 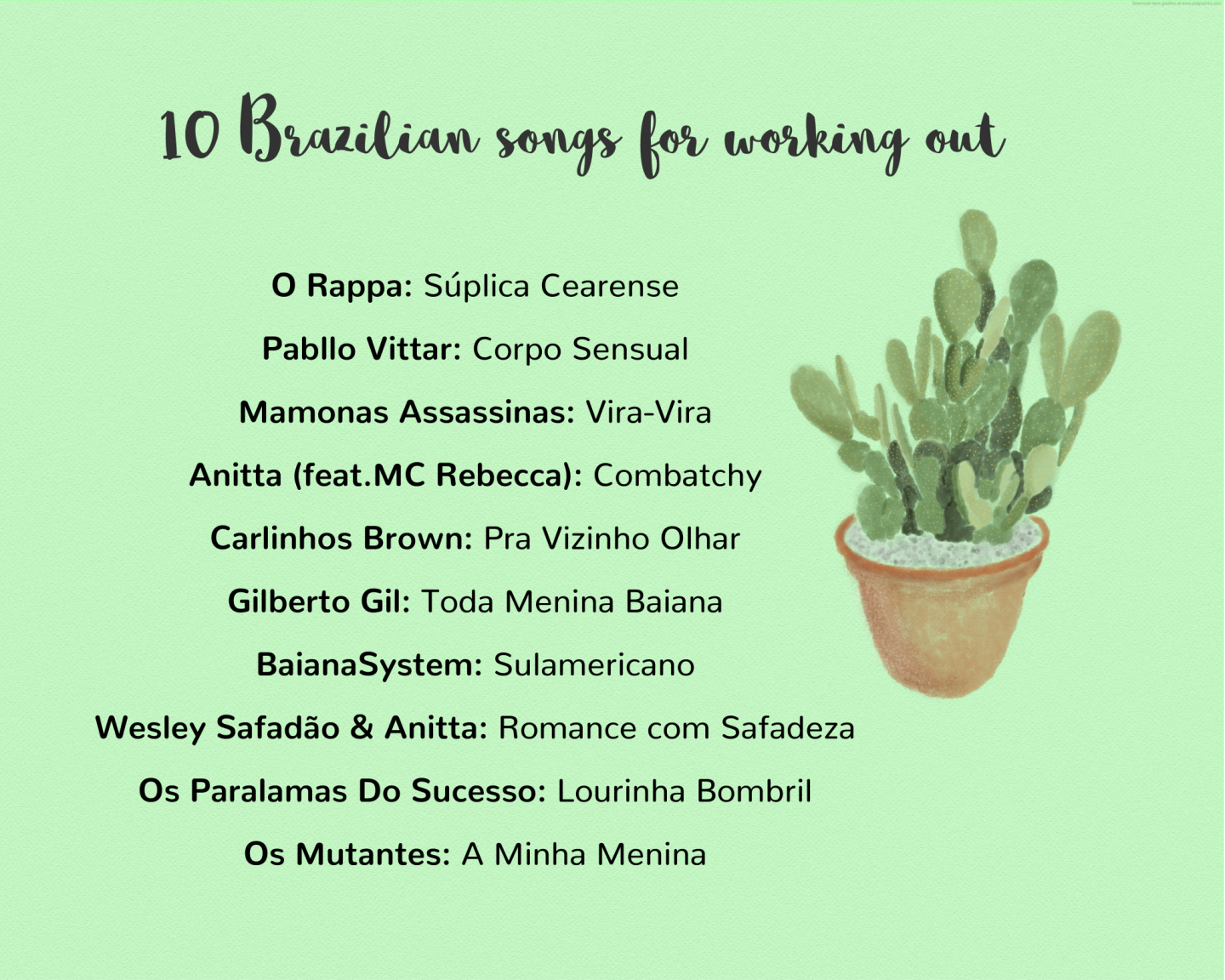 These Brazilian songs for working out can take you from the tropical beaches of Rio to the country music of the Brazilian interior. Not a set of musical genres usually grouped together, though this mix will give you the energy to get through any task. The playlist runs for 35 minutes, so great for a short work out or a warm up.

Listen to the 10 Brazilian songs for working out on Spotify.

O Rappa is a reggae/rock band . The group is most well-known for their lyrics called out social injustice. They also shoot powerful video clips in various communities around Brazil.

Pabllo Vittar has appeared on stage with the Black-Eyed Peas, collaborated with Anitta and has 6.7 million subscribers on YouTube. She is the most streamed drag queen in the world and the first to be nominated for a Grammy.

We had to include this satirical band, who wrote catchy provocative tunes in the 80s. The band passed away after a tragic plane crash in 1996. This doesn’t stop their music still playing in every wedding, BBQ, work-do across the country though.

Anitta is the queen of Funk, a Brazilian rap genre that emerged in the Brazilian favelas. Her videos are outrageously sexual, but that’s the appeal. The video for her hit Vai Malandra is shot in Vidigal a favela community in Zona Sul of Rio de Janeiro. Anitta is a 5 times Latin Grammy-nominated artist and has won countless MTV awards.

Brazilian singer and percussionist Carlinhos Brown hails from Bahia the state of the first capital of Brazil. Carlinhos Brown has recorded with many popular Brazilian musicians including Gilberto Gil, Caetano Veloso and founded Os Tribalistas with  Marisa Monte and Arnaldo Antunes. He also began the percussion group/ project Timbalada in 1991 that celebrates the many facets of Brazilian percussion.

We’ve featured Gilberto Gil before but he’s so diverse. Did you know he was the Minister of Culture of Brazil for 6 years?

Another group from Salvador in Bahia. This band are focused on mixing genres and meaningful lyrics. They’ve gained fame internationally, winning the Portuguese Language Rock or Alternative Album Latin Grammy in 2019.

Wesley Safadão is a highly popular country singer from Ceará. Safadão is his stage name, beginning his career leading a band called Garota Safada. On average he performs 25 shows per month!

Paralamos translates as mudguards, as in those bits on top of the wheels. So, the band’s name is “the Succesful Mudguards.” The band first formed in the late 1970s and they’ve recorded over 177 songs.

An entirely different route this orginally 5-piece rock band has been popular since the 1960s. The group are known for their participation in the Tropicália movement against the Brazilian 21-year dictatorship. Os Mutantes later split, and singer Rita Lee went on to lead a highly successful solo career.

Our Other Brazilian Playlists