12 Incredibly Useful Things to Know Before Going to Cumbuco, Ceará 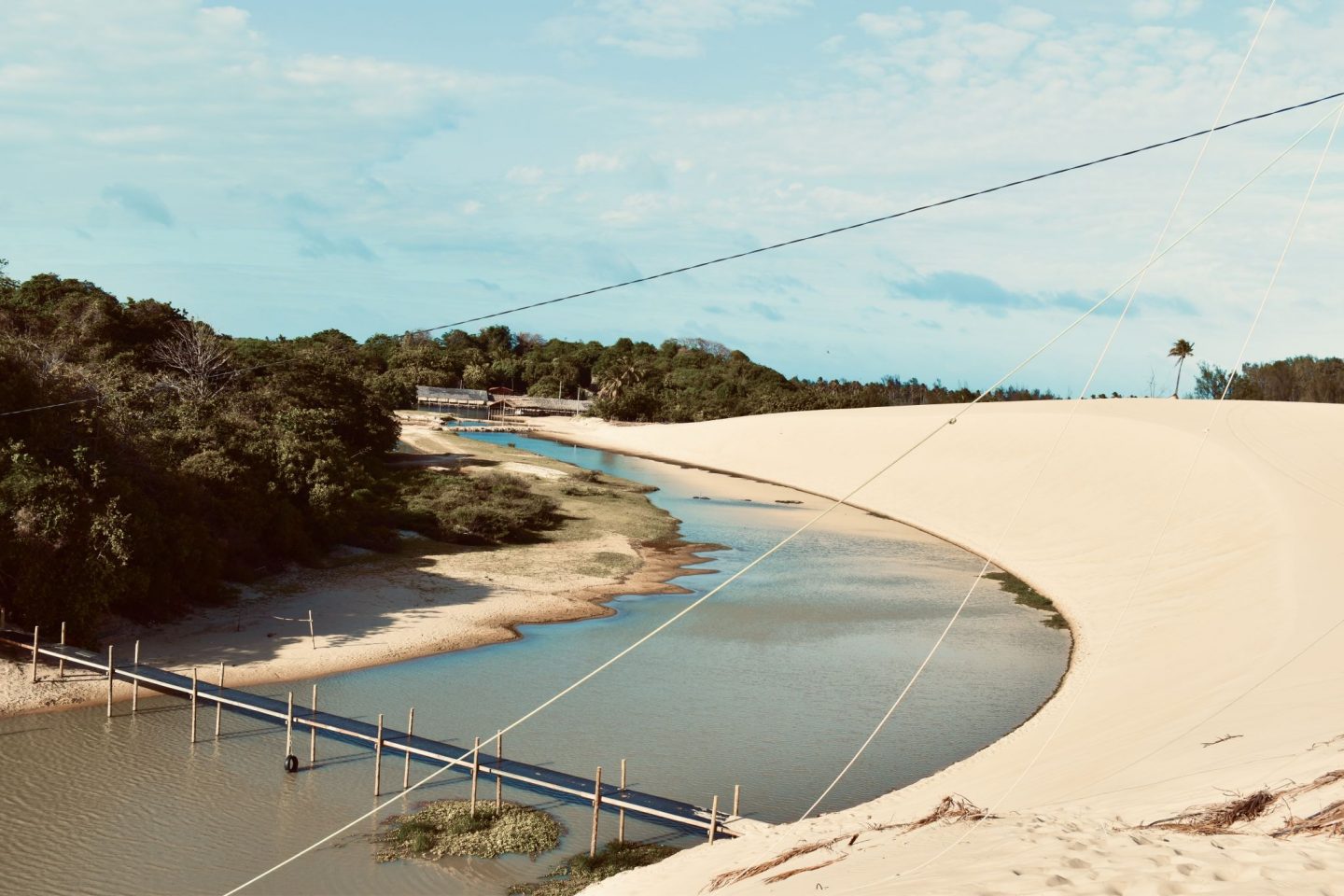 Cumbuco is the term for cows where the tips of their horns curve and face each other. The name is also attributed to the curve of long and low waves that mirror the same shape of these horns.

These waves are typical of Cumbuco, a slither of green sandwiched between the sea and the sand dunes in Ceará. It is a sleepy fisherman’s’ village in the Northeast of Brazil and arguably the centre of the world’s best kitesurfing.

Cumbuco sits just 30km west of Ceará’s capital Fortaleza. Ceará was baptised the “Terra da Luz” (Land of Light) for being the first state to abolish slavery in 1884, 4 years before the national law prohibiting the institution passed. More recently the state has been noted for its phenomenal progress in reducing criminality and enhancing overall education levels.

In 2019, under a three-fold project Ceará achieved the greatest reduction in crime rates in the whole of Brazil. Homicide rates fell from a rate of 56.9 per 100,000 inhabitants in 2017, to 24.7 in 2019.  Achieved by reorganizing the prison system with the employment of 10,000 new security professionals, shutting vulnerable prisons and transferring incarcerated gang leaders to combat prison privileges.

The state simultaneously rolled out new education projects, the third branch of the initiative. The state invested in education to prevent situations of vulnerability that lead to crime. Schools introduced mandatory classes on socio-emotional skills, national exam preparation and rigorous policies on unexplained absences in school enrollment. The state has 98% of children between ages of 6-14 enrolled in basic education. An incredible achievement for the historically exploited and disadvantaged region of Northeast Brazil.

Ceará is progressive, with a treasure-trove of natural wonders that offers a remarkable, alternative Brazilian tourist destination. Here’s 12 incredibly useful things you need to know before visiting Cumbuco in Ceará.

Cumbuco is the No.1 kitesurfing destination in Brazil

Cumbuco has soured to the top as a kite surfer hot spot because of the of steady winds. In September 2019 the beach entered into the Guinness Book of World Records for the most kite surfers at one time. 596 kite surfers participated in the event. Even if you decide not to try kitesurfing, the views of hundreds of colourful kites littering the skyline is mesmerizing.

Ceará has a windy and not windy season

From June until December the winds are constant, becoming an extremely reliable destination for kite surfers. This time also coincides with the dry season with winds that reach 19 kilometers per hour.

Trips into the sand dunes that serve as a backdrop to the village take about 2 – 3 hours. You pay a standard fee, but there are add-on costs. During the trip you will visit spots to sand board, places to zip line down a dune and into one of the lagoons and bars perched at the top of the dunes overlooking the rivers and caatinga forestry. Bring extra cash to the tour to enjoy these extra activities. Wear a lot of sun protection because you will be under the sun for up to 4 hours.

You can opt for a sand buggy “com ou sem emoção,” (with or without excitement). The city carves 2 routes into the dunes. One will hurl you over 45° hills at an adrenalin-spinning speed. The other buggy meanders gracefully through the maze of dunes.

The best period for harvesting caju, which is the pseudo fruit of the cashew tree (the fruit being the cashew nut) is January and August. The rest of the year much of the fruit used will be frozen not fresh. Ceará contains 55% of the caatinga a type of Brazilian biome that features the enormous cashew trees. It is squeezed between the glistening white beaches of the Northeast coast and the sand dunes that separate it from the semi-arid sertão.

No vendors on Cumbuco beach

The beach of Cumbuco has few vendors, uncommon for a Brazilian beach. This is important to know so you position yourself in accommodation that offers drinks, snacks, beach chairs and shade. The sun is relentless in Ceará and the wind can be misleading.

Cumbuco has a few excellent restaurants and they don’t all feature on Google reviews or Trip Adviser. The infrastructure is more basic than popular beaches like Jericoacoara, so avoid disappointment by eating at the following restaurants.

R.I.O – this is a boutique hotel that has a rooftop restaurant overlooking the sand dunes on one side and the sea on the other. The owner is a French chef who founded 16 restaruants around the world. He built this hotel as his retirement plan. You have to call in advance to order your food and make a reservation.

Ceará has the most reasonable prices in the whole country for the red snapper at half the price of Rio de Janeiro.

Rent a car or stay in a hotel that offers airport transportation. If you decide to drive in Brazil read these notes on regulations. In Cumbuco the sea mist will layer the car in a sticky salt so carry a bottle of water to clear the mirrors and windshield.

Swimming in Cumbuco is possible year-round, but during the windy season waves are better suited to confident swimmers. Even in the windy season the waves are low in the early morning and as the sun is setting. This is when the winds drop because of cloud cover. There is no dangerous undertow in Cumbuco, but there are also no lifeguards, except in the large hotel resorts.

The all-inclusive Galé resort has the biggest waves, but there is a lifeguard. The waves are more suited to surfers, although the resort does offer numerous swimming pools.

Jangadas are a traditional Brazilian fishing boat common in the Northeast. In Cumbuco you can join touristic boat trips to natural pools. A famous jangadeiro of Ceará (a jangada sailer) is Dragão do Mar who led strikes by a group of jangadeiros in 1881. The group refused to transport enslaved people to be sold in other regions of Brazil. Three years later the state abolished slavery entirely.

Jangada trips are more common in the states of Pernambuco and Alagoas.

A memorable souvenir from Cumbuco we recommend is a handmade jangada model. The craftsman makes the model from recycled wood. Including intricate details of the traditional fishing equipment, local fish and knife tools and a working organic cotton sail. The craftman will also carve personalised names and dates with a fire tool by request. The boat costs R$180 and a percentage goes to charity. José Airton de Sousa Monção sells his product inside restaurants and on the beach front along Cumbuco.

Cautionary note: in 2019 the city of Caucai was enxperiencing disputes with the garbage collecting contractor. The area had issues with littering because the wind was blowing the uncollected light-weight garbage. We will continue to monitor this situation and update the page when the dispute has been resolved.