10 Brazilian Songs for Roaming the Supermarket 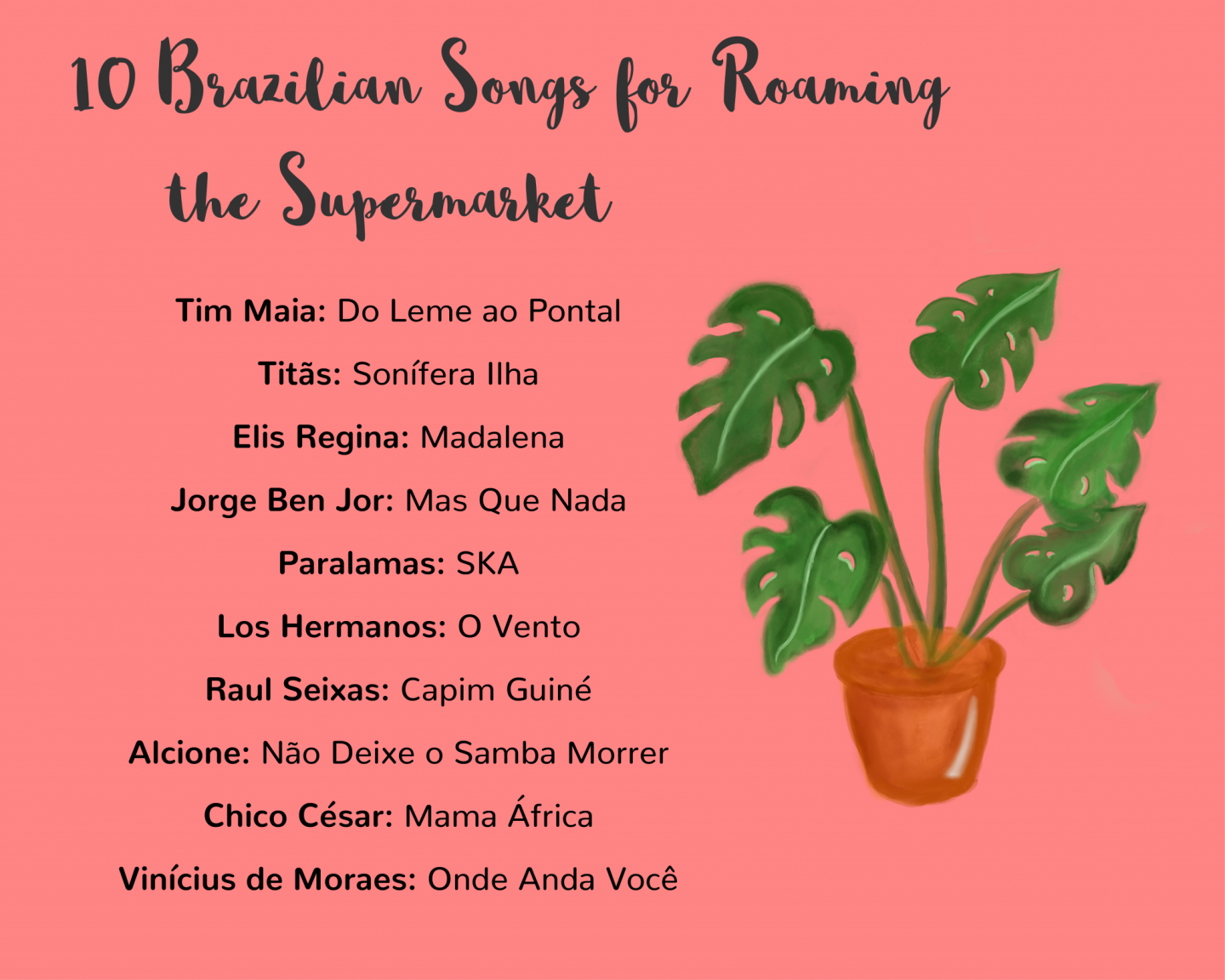 Do your weekly shop with a spring in your step. This playlist of Brazilian songs is ideal for roaming the supermarket.

Tim Maia is a prolific Brazilian soul and MPB singer. This song plays tribute to the 35 kilometre coastline in the city of Rio de Janeiro, which provide a continuous beachside path. It begins in Pontal the end of Recreio beach and ends in Leme the far end of Copacabana beach.  This is also the route of the annual Rio Marathon, though it extends the extra 5 kilometres past Leme.

Titãs meaning titans in English is a Brazilian rock band from the 80s. At one point the group included 9 musicians with 6 vocalists.

Elis Regina sang with both Tom Jobim and Vinícius de Moraes the founders of Bossa Nova. Widely consider one of Brazil’s most iconic voices, Regina passed away at the age of 36 from a cocaine overdose. Her daughter Maria Rita still sings and is a popular MPB, samba singer.

Even if you don’t know any Brazilian music you’ve heard Jorge Ben Jor. Growing up poor in the favela community of Rua do Bispo in Rio de Janeiro, Jorge taught himself guitar, to sing and play tambourine. The latter gained him an in with local gigs and bands.

Jorge Ben Jor added the last “Jor” only in 1985 when he signed to an international record company. This was to avoid losing royalties to another musician George Benson.

The group Paralamas do Sucesso got together in the late 70s and still tours today! We love them for their full ensemble of instruments and experimentation with rythms. There solid fan base has kept them going for 5 decades. In 2001, Herbert Vianna the lead singer of Paralamas was involved in a plane accident. Herbert lost his wife in the accident and now performs in a wheelchair.

Los Hermanos is a spanish, though the band is entirely Brazilian rock (it would be Os Irmãos in Portuguese). They are another rock band with a Brazilian twist, who are currently on “hiatus,” but could be back together any day.

Baiano musician Raul Seixas began his career by founding a rock band that mixed with the Northeastern genre of Baião music. Seixas passed away in 1989. His music features in the cult Brazilian movie City of God.

Female samba singer Alcione and interpreter of MPB music in Brazil. She won a Latin Grammy for best Samba Disc in 2003. Alcione is also the ambassador of tourism in Rio de Janeiro and Maranhão.

Chico Caesar is a self-taught musician. He gained success after he formed his band Cuscuz Clã (a pun of the racist American group), rallying fans around Brazil.

Vinícius is one of the founders of the Bossa Nova genre and movement. He composed the lyrics to Garota de Ipanema (The Girl from Ipanema), which is the second most played song in the world.

Add it to your Spotify with our playlist.