10 Brazilian Songs to Serenade Your Love 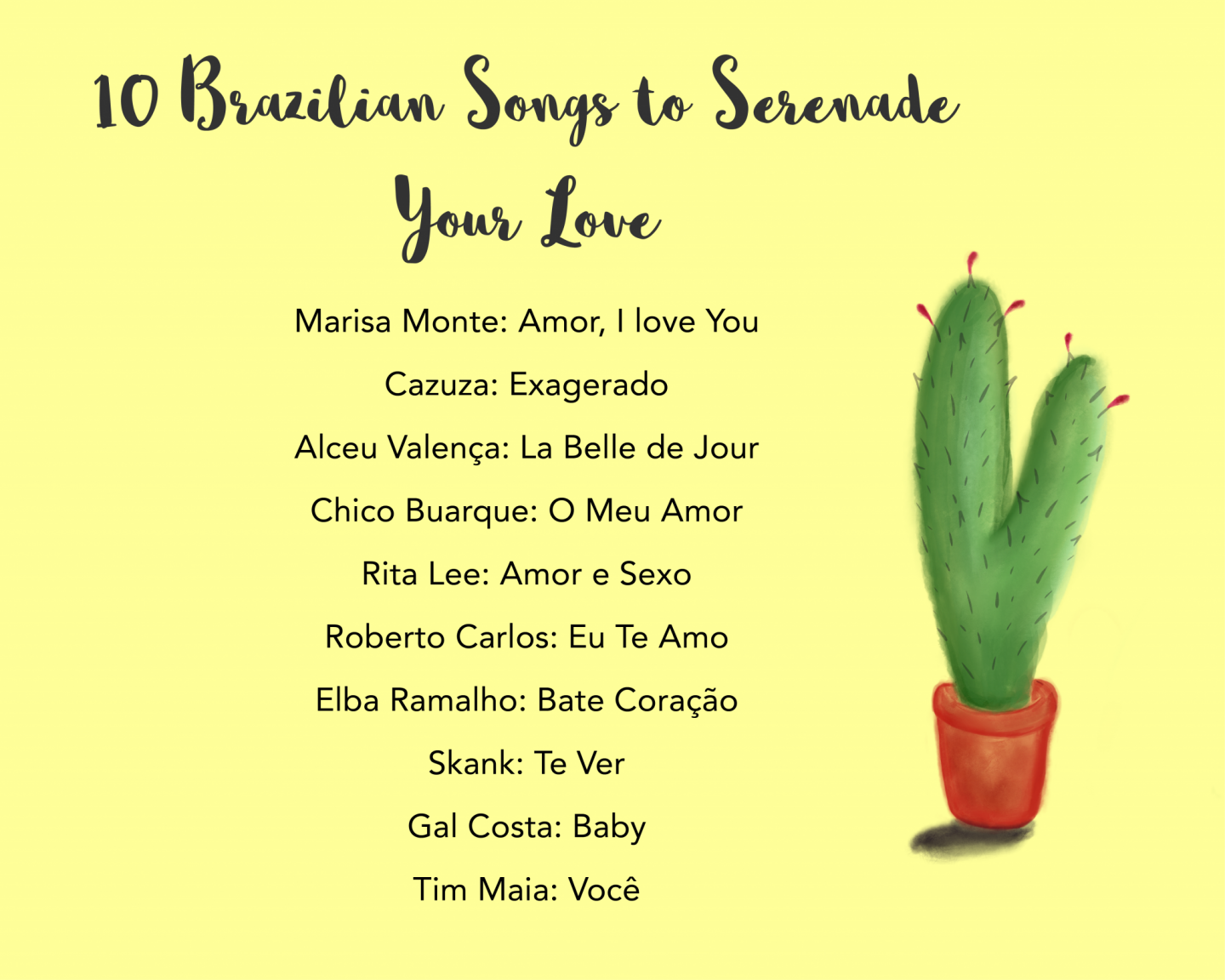 There’s something sultry about Brazilian love songs. Maybe it’s because my husband is Brazilian and these songs have become a soundtrack to our lives of sorts. It’s a different kind of love. Not a cheesy ballad, though I’ve definitely included the silver fox of Brazilan heart throbs (Roberto Carlos). Instead, this is an eclectic mix of instruments and minor keys that makes you dream of a private beach with your love.

Marisa Monte – Amor I Love You

Cazuza first became famous as part of the Brazilian rock band Barão Vermelho. He then went on to record solo music drawing on more MPB influences.

Valença was born in the countryside of Pernambuco near the sertão. His music is heavily influenced by the culture of the Northeast mixed with the popular MPB genre.

Buarque is more than a musician, he has also written books and won the Portuguese Laureate for Literature for his outstanding lyrics. In 2018, he won the Latin Grammy for his album Caravanas. The headlining album song explores the discrimination against Brazilians coming from the city peripheries to enjoy the beaches of Ipanema and Leblon. Buarque then correlates this prejudice to attitudes towards immigration around the world.

Rita Lee was born in São Paulo to immigrant parents. Her father was an American who settled in Brazil after World War II. The US airforce set up airbases in Northeastern Brazil for strategic access to Europe. She sprung to fame as part of the rock band Os Mutantes, later lauching her solo career.

Roberto Carlos is both a gospel singer and a pop singer. Such a Brazilian idol that he headlines his own show every New Years Eve. A Brazilian tradition that millions of Brazilians dutifully tune in to each December.

Elba Ramalho was born in the State of Paraíba and her music is distinctly Northeastern. It gained her the reputation of ‘Queen of Forró’.

Skank is a 4-piece Brazilian rock band coming out of Belo Horizonte the capital of Minas Gerais. The derogatory pun in English is on purpose. Skank sing cheeky pop, reggae, ska and rock mixtures. They’ve faithfully released albums for the last 2 decades.

Gal Costa was part of the Trocália music movement against the 20-year dictatorship in Brazil. Other fellow musicians were Caetano Veloso, Gilberto Gil and the band Os Mutantes.

Tim Maia created some of the best MPB dance music the world has heard. Maia has a colourful life story, including arrest and deportation from the US and leading his own religious cult.

So here’s just a little selection of Brazilian songs for a moment when you’re feeling in love.

Link to our Spotify playlist is here: https://open.spotify.com/playlist/559zKsJLM9QHIwSNv4orV6

You may also enjoy 5 Ways to Call Your Love in Portuguese.