How to Thrive as an Expat 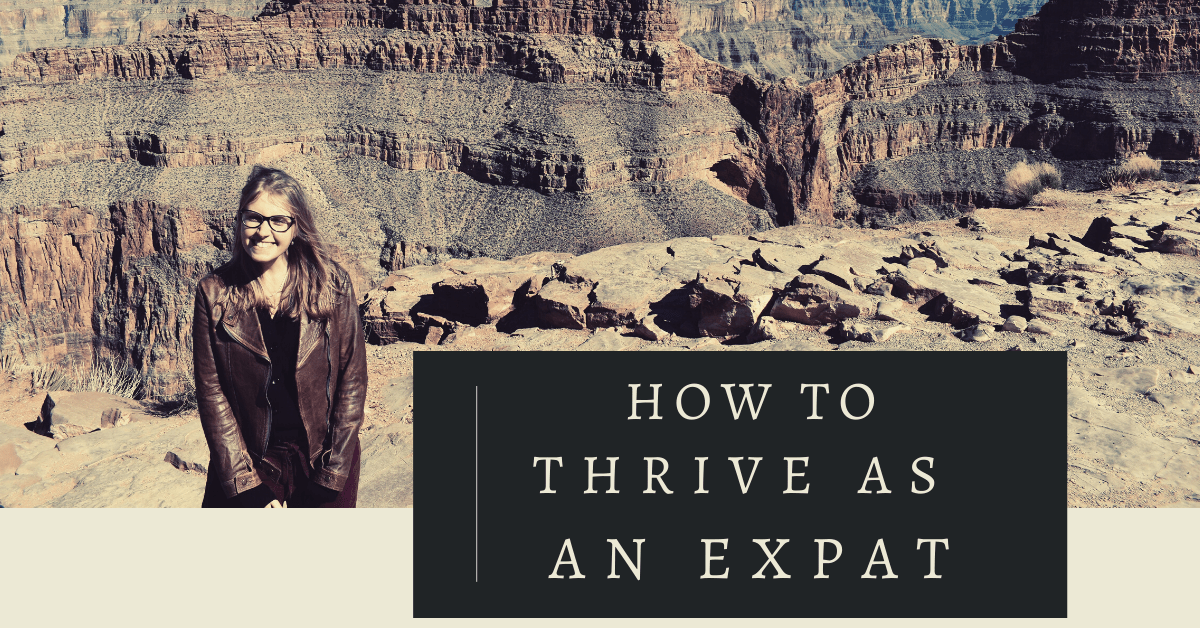 Remember that scene in Beauty and the Beast, when Beast slurps up his soup right out of the bowl? We all have a little judgey chuckle at his ignorance. Poor guy, he doesn’t even know how to use a spoon! 80 percent of the world do not use spoons. That is a figure I completely made up, just like the phrase “normal.” My expat advice is “normal” is a relative word to describe exactly where you want to draw your excluding boundaries.

That bowl slurping is life as an expat.

What encompasses normal in one region of the world may steer you into “friendless alley” in another.

On arrival to a new country there are all these rules, weird cultural traits and traditions that just do not make sense. Usually, in a passing holiday, there is not too much harm done from ignorance other than a stain on your country’s reputation. Luckily, two weeks later you’ll be jetting your way back home, to forget forever your mistakes.

If you’re in it for the long haul though, all I can describe it as is a sense of Displaced Adult Bewilderment.

That is, you landed in a country as a (sort of) rounded adult and suddenly you have to learn everything again, without the benefit of the doubt that children are permitted. It’s going to be frustrating, patronising and you’ll have to swallow many things that are second nature.

Truthfully, I rebelled against this last one as I’d finally had enough of swallowing down mouthfuls of potato on my dry, dry throat.

Once I lived with a host family on the Ecuadorian coast. A family of eight children with no internet, only one dvd, which was an African wildlife documentary and a bucket of water used to flush the toilet.

[bctt tweet=” It was not unusual to peer into my soup bowl and notice unidentifiable floating objects. Sometimes they became identifiable, when I glanced over at the host dad who would happily be chomping at chicken knuckles.” username=”@footlooseLJ”]

You have to both compliment the recipe, tell a story about an amazing encounter with a gazelle and help collect the plates.  Strategically you place your chicken knuckle bowl inconspicuously amidst the other 10 bowls.

While fishing out chicken claws from your soup may sound exotic, I’ve been just as baffled by the Taco Bell experience. On our first week in the USA we learnt that you can pre-order fast food (why?).

Read about our Taco Bell Ruin and 7 other lessons from the USA, gathered over our first year living in the USA.

You are a Tarzan.

A Tarzan in a world full of Janes.

The Janes, the natives have had rigorous “normality training” since the age of – 9 months. You expat, new comer have got to momentarily chuck the guidebook out the window.

A chicken knuckle may be a delicacy, however, you do NOT have to eat it. You must therefore be able to handle the situation. Diplomacy and a dash of showmaness can keep everyone happy.

To follow is my key pieces of advice of not sucking as an Expat – both in the sense of your own sanity and of the feelings of your brand new comrades.

Expat Advice You can Count On

1. Laugh When Others Laugh

The whole room is rocking side to side on belly ache laughs about something that you haven’t the faintest idea. You will look like a muppet sat there with a dead pan face. Just go with it. This is no different from the  times you had to laugh at your manager’s none PC jokes.

If you are bad at fake laughing, smile and shake your head slowly, looking down at the ground. Like you are thinking “oh that was a good one.” Do you get me?

The beauty of Brazilians is sometimes they like to retell stories and jokes. And guess what SO DOES EVERYONE. Eventually, I was truly laughing at the actual jokes. You can tell when the end of a joke is arriving because the voices get a higher pitch. Pace yourself or you can give away your whole game. Laugh before the climax and you’ll have to explain yourself, but perfectly timed and you’ll blend in with the crowd.

Take a look at our post on 10 low-effort ways to learn a second language to ease you into learning the local language.

2. Factor in Half an Hour Extra to Leave

Some would guess that traffic or disorganisation is behind this, but that can be said in any city or country.

Actually, that’s nothing compared with “The Struggle.”

The Struggle is you trying to weave yourself out of a social event. The lunging arms of relatives and several rounds of farewell kisses. The persistent questions of friends, asking please PLEASE when will I see you again?

The ENDLESS saideira. I am not a violent person, but the saideira is something that I would dangle down a well and walk away. It is the last beer. The last beer though is never really the last beer. Sometimes it’s just a contemplation that maybe we should pack in the night. It’s a pre-saideira. There is absolutely no indication of how long a saideira can linger, but you can calculate in many minutes extra.

If you walk free earlier, congratulations treat yourself to 10 minutes extra in bed. I am yet to fare so well after the haunting words of “saideira” have passed someone’s lips.

It is like factoring in the likelihood of being stuck behind a person who has never been through airport security and packed everything but the kitchen sink.

Add on a chunk of “leaving” time when abroad.

3. Use the Word Impressive

This one is based on equipping you with a word that is ambiguous. A word that you can easily slip into a situation and mean two completely opposite things.

It can be either:

“That is extraordinarily good, you are blowing my mind at this ingenuity!”

“The sheer cheekiness of that is also blowing my mind in a negative manner, how could anyone be so benighted?”

Impressive, the chameleon of all the words.

At this point you must do some input output analysis.

Input: what kind of country is your native land?

Do you a) constantly overlap each other so the conversation is a buzz of indiscernible chatter?

b) Conversation is always made in response to a previous statement, pauses are frequent, even if brief?

Output: Does the conversation of your expat country correspond or differ?

My UK is a B country and Brazil is an A. If you don’t step on the end of someone else sentence (in a group situation) you will most likely be silent for the entire encounter. It is not particularly rude to butt in. If the speaker really feels he hasn’t finished he will just keep going, at which point you stop and wait. If he’s happy that you piped up he’ll fizzle out.

It took me a year to catch on to this one. Though in my opinion it means if you start speaking a thought that you can’t finish someone else will quickly chirp in. So it’s better to just speak.

Sometimes, I think it needs to be scaled back when the output country is a B and the foreigner is form an A kind of country like Brazil, Mexico or France.

5. Take Everything with a Pinch of Salt

Once I was told my hair was terrible, I’d put on weight, my dog had put on weight … I just think that sometimes people can be a little blunt. Whereas, in the UK we have be sheltered against such brutality by our fear of offending, many other places in the world are less pragmatic.

Chinese is the bluntest language, they don’t even have modal verbs. In Japan they believe that truthfulness should come before anything else. In Brazil they seem to want you to just look your best. So, to begin with you must know it is not done out of spitefulness and your hair could actually just be off-centered. Take it with a pinch of salt!

Secondly, exaggeration. I am sure that you were not there when Pablo Escobar was caught… (I was actually told this story), but it makes a great conversation.

On my rigorous survey of two expats (+ an aquantaince) living in Brazil we agreed that the milk is not the same. We both became really very ill, cut out milk and felt dandy again.

Anyway, there is just something different about milk in all the countries and it just has never sat well with me and my I have had a certain level of agreement among fellow expats.

People are going to try to play you.

I’m not talking about the chicken knuckles in the soup, but services. It truly happens anywhere. Your grandma walks into the phone store and leaves with a contract. Two weeks later her contract has doubled and a miscellaneous items have appeared on the bill. They think they can get away with it because she is going to be less likely to check up on the small print and call them out on it.

Likewise, a new expat is much less likely to have the resources to defend themselves. This story above happened to me numerous times with phone bills. How did I handle it?

I brushed up on my authoritarian Portuguese voice. I have won every time. I even got some freebies.

It may be daunting, but that’s what they are counting on. I used to rehearse my complaints before ringing. Honestly, it was quite comical the amount of time I spent prepping myself.

You can resolve to pigeon language, “You stole money. Give me refund.” They can’t hang up on you.

Remember we are Tarzans.

Even if you don’t know anyone you cannot fester in your apartment.

I took up running in Brazil. It meant I got to go to the beach or the lake everyday. I would drink a coconut after my run like everyone else. I would see the world go by and would be part of it. You can’t love where you are if you only see it from your apartment window.

Going out Ideas where you don’t look like a lonely loser:

Morning coffee on the street or in a mall

Lunch smoothie with all the fancy businessy people

BTW: I don’t always follow every piece of my own expat advice, but I know I should!

If you are looking for more specific advice, I also have a full guide to being an expat in Italy and an article on lessons learnt in the USA.

Those of you that are traveling long term and want to rent out you place I have a 101 guide to becoming a good airbnb host. It has allowed me to travel the world while simultaneously paying off my mortgage!

What expat advice do you have?