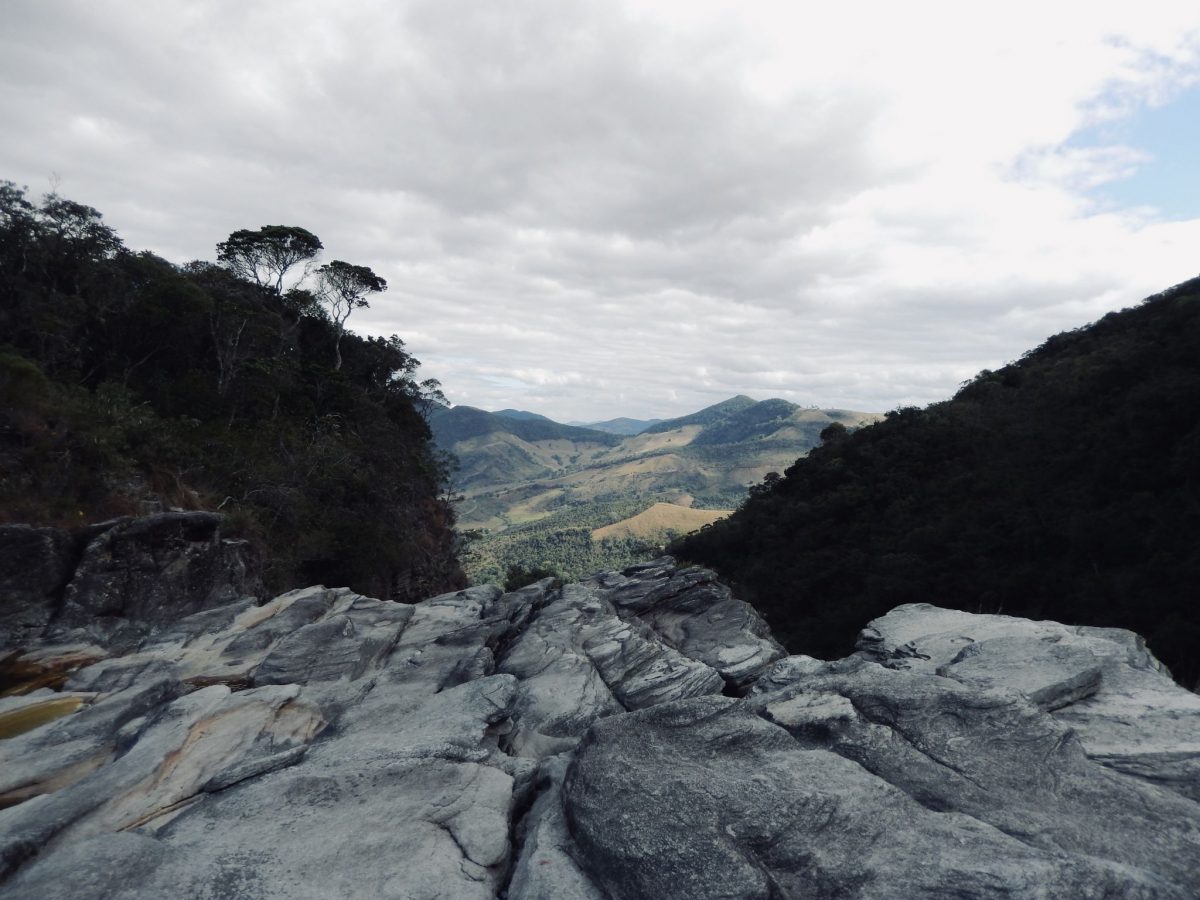 Ibitipoca is a state park in Minas Gerais famous for being home to the Lobo-Guará (the Maned Wolf). A Brazilian wolf appearing a little like a stretched-out fox. Ibitipoca is a rare island of the wolf’s natural habitat, the cerrado. The cerrado of Brazil concentrates from the Northern part of Minas Gerais across to the Pantanal and merging with the Amazon, but Ibitipocha is an island pushed up millions of years ago and now surrounded by the rich Atlântic forest. It’s a paradise rock that offers panaramic views of the never-ending hills of Minas Gerais.

My first trip to Ibitipoca was for the chance to see the lobo-guará. Hiring a car in Rio, we drove roads that twisted through the Atlantic forest which eventually descending down a rocky dirt road. The only access to the town of Conceição do Ibitipoca. It was a last minute jaunt after hearing about the Jazz festival. An hour from a main town, Ibitipoca is isolated with poor phone signal and no gas station. Unless you want to be siphoning petrol in a coca-cola bottle like we did, ensure you have a full tank of gas before venturing down that dirt road.

Near the park entrance it may feel like a tourist trap as hoads of tourists pour past the gate. Wear the right footwear though, and you can quickly leave behind the crowds arriving at crystal clear waterfalls and breathtaking views. The first thing I noticed as we trudged on past the compelling but teeming waterfalls, was the floor. It glitters. This biome is a concentration of unrefined quartz so the very stones you walk on shimmer beneath your feet.

We explored for 8 hours on that first magical trip. Twice snakes darted out across the quartz paths and more than once magnificent birds of prey swooped high above, perusing this wilderness for morsels to attack. We saw less than 15 people on the trails.

Below we highlight some points of interest to tailor you trek, but we were guided by a patted down path that generally follows the streams. Streams so clear that you can simply fill up your waterbottle throughout the day. In the end, as the sun set and we rambled the last kilometre, 2 incredible surprises greeted us. More stars than I have never seen in my life lit the quartz path, like a sparkling fairytale.

Then as we rounded the last corner leaving the park, we heard the howl of the lobo-guará waking up for an evening of adventures, empty of prying tourists.

Points of interest in Ibitipoca

A Janela do Céu (Sky Window) is a natural pool that cascades off the edge of a high mountain plateu. The effect is a crystal clear pool with a breathtaking view over the Minas mountains, just like a window, bear in mind it is an 8km trek.

A Gruta dos Três Arcos (Three Arch Cave) is a cave that lets in rays of light from the 3 openings. This gives an effect that the roof is balancing on 3 pillars.

Cachoeira dos Macacos (Monkey’s Waterfall) and Cachoeira da Pedra Quadrada (Waterfall of the Square Rock) are both crystal clear waterfalls where weather permitting you can swim. A couple of species of monkeys can be spotted at the park, hence the name.

O Pico do Pião is the final viewpoint and name of one of the treks in Ibitipocha. The trek runs past several different caves and ends at the ruins of an old chapel. The trek is about 11km in total.

What are the rules?

Ibitipoca has become increasingly popular, so they have capped the number of visitors to 1000 per day. Therefore, it’s good practise to get there as early as possible. Detailed information in Portuguese can be found on the official Ibitipoca website.

Vehicle Fee: R$25 per car. (You can park outside the park and just walk in)

Camping: there are limited camping spots that cost R$60 per person per night.

Ibitipoca lies an hour and a half from Juiz de Fora, the largest nearby town.

Driving from Rio de Janeiro, drive North following the BR-040. Make sure you bring cash because there are 4 toll stops along this highway. Each toll costs R$12, but is always subject to change at short notice.

You cross into the state of Minas Gerais as the road drives over the Três Marias river. You can stop in the following two possible cities to split up the journey.

Petropolis was the summer residence of the old Brazilian royal family. Petropolis is a city built into the mountains and offers a cooler respite with some excellent restaurants and hotels.

Juiz de Fora is a large and safe city that serves as the portal to Minas Gerais driving from Rio de Janeiro. Juiz de Fora is an affordable city with plenty of traditional cuisine for a fraction of the price of Rio.

From Juiz de Fora take the BR-267 and follow the signs to city of Lima Duarte. Just after Lima Duarte there will be signs to Conceição do Ibitipoca, which follows a dirt road. Don’t be alarmed this road leads to the little village and can get muddy during the rainy season, when we advice using a 4×4 car.

Notable Festivals, Bars and Restaurants in Conceição do Ibitipoca

Conceição do Ibitipoca is the closest village to the National Park. In the town there are a handful of restaurants, bars and accomodation choices to suit various budgets.

Ibitipoca Jazz Festival has run for the last 20 years in the month of July. A number of high profile sponsors enables an exciting national and intenational lineup. You have to pay to get into the restaurants and bars where the performances take place and the restaurants usually serve up a special events menu.

Ibitipoca Blues is scheduled for the end of August running for 4 days. If you plan on attending the fetsival grab your tickets early and pre-book accommodation. This is more of a street festival where there is one price to enter and watch the musical performances in the open air (bring a big jacket August is chilly in Southern Minas Gerais).

Gula do Lobo had live chorinho and MPB music when we ate there. Once they served up all you can eat feijoada for R$15 (US $4)! The menu features traditional Brazilian cuisine serving options like bacalhau (codfish), pumpkin and gorgonzola soup, and Mineiro vegetables like quioba and baroa potato.

Oliva Bistro has a terrace that overlooks the countryside with a top chef. They serve specialities like Mineiro sausage, torresmo and palm heart salad.

Portal da Serra is a collection of bars and shops where you can eat in a courtyard usually with some form of live music in the background. Ibitipoca gets cold in the winter months dipping close to 0 celcius. We suggest ordering hot shots of honey cachaça from any of the informal bars around or Minas hot chocolate is wonderful for a non-alcoholic alternative.

Bar do Firma sits on the entrance to the village a little walk away from other bars and restaurants. The walls are adorned with paraphernalia that the owner accumulated over the years. There are hidden bottles of cachaça in the ceiling that you can lower down with a string to sample. Expect a rowdy crowd and live music. It appears the bar shut for a period but is up and running as usual again. Enusre you check the Facebook page for the most up-to-date information.

Other post you may enjoy:
Common/ Spanish Mix Ups
15 Insanely Useful Things to know Before Going to Brazil
10 Tips to See Brazil on the Cheap