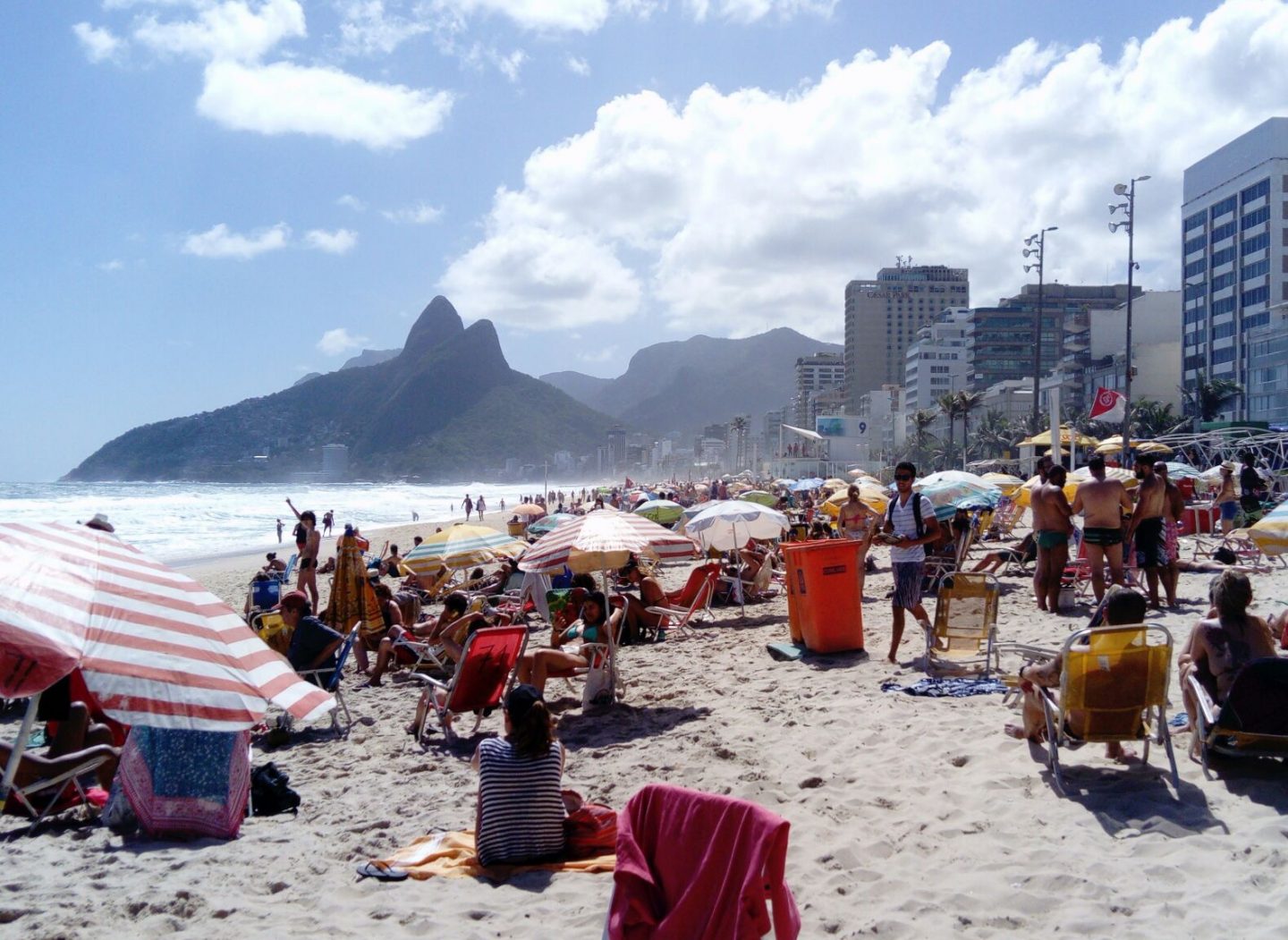 I would describe Ipanema as a delectable frozen yogurt. A traditional beach neighborhood with a tangy Brazilian twist. The dashingly white sand of the beach bumps into the Atlantic ocean, which means icy fresh waves originating from the Antarctic. The whole neighborhood is overlooked by jutting out mountains and is littered with flash dining experiences.

The name Ipanema resonates with most people from the song “Garota de Ipanema” or “The Girl from Ipanema”. A smooth Bossa Nova classic, that if you listen carefully, infiltrates your life on a daily manner, be it in a movie, in your local coffee shop or supermarket. This is the second most played song in the world, right after happy birthday. Which makes me happy because it shows we spread the love on people’s birthdays (there is hope in the world yet, Alleluia)!

Fun fact for you all, Garota de Ipanema was based on a 17-year-old girl that used to stroll past the song writers Vinicius de Moraes and Tom Jobim. OK, let’s glaze of that creepiness, but I’ll tell you Ipanema is known for its Eye Candy. The beach is a workout hive and you can rub shoulders with celebrities on a daily basis.

Even the floor is eye candy made of Portuguese style of creating patterns with black and white stones. Though, one difference between Ipanema and Copacabana is the design of the Portuguese stones on the sidewalk. Whilst in Copacabana the famous wave style, evocative of Lisbon make an appearance, in Ipanema squares are the game. Cool art deco style, just like the glamour that is oozed by those that frequent the beaches.

Now I’ve wet your appetite, buckle up for my Knockout Neighborhood Guide of Ipanema!

Açaí is a frozen drink made from the Amazonian berry Açaí. The berry pulp is mixed with Guaraná syrup to make a delicious tropical slushy. You can mix in anything you want, though the price will start mounting up. I love to sprinkle granola on and usually opt for the 500 ml to share with my partner.

Polis Sucos is just a juice bar on the corner of Visconde de Parajá and Maria Quitéria that has a few benches and a bar where you can stand to eat. The idea is to grab your drink and snack to go, since you are just a couple of blocks from the beach front.

The açaí is more than enough, but if you want to make it a real meal you can grab a filé mignon sandwich, which is scrummy. It looks tacky on the sign, but it is melt in your mouth.

Pay before you eat and hand the receipt over to one of the guys to put your order through.

2. Ipanema Beach: Grab a Chair and an Umbrella!

From my knowledge and upbringing as a Brit, it is totally the norm to head down to the beach with your towel and pay for nothing. In Ipanema the norm, and I would suggest you follow it, is to pay for a chair and an umbrella.

The sun is bright and hot hot hot and you are going to want to protect your beautiful skin. This way you have a break from the blazing inferno and if you should want, the beach tent you rented from will be able to serve you ice cold refreshments.

Please don’t bring your flash stuff to the beach. Just your hot bod and the openness to be ready for a constant bombardment of vendors. Ipanema is not a relaxing destination. It is the social life hub of Rio de Janeiro. Kind of think of it like a giant sandy bar.

Arpoador is technically a mini neighborhood and it is the name of the rock that juts out at the end of Ipanema, making a separation from Copacabana beach. Most people love to stroll down to this rock and watch the sunset, which is applauded by the way.

However, I get a thrill from heading there early morning. Before 8am the sun is not too hot and you can jog or power walk (no one is judging) along the beach then walk up to the top of the rock. Here there are several huge boulders you can park your butt down and take in the stunning neighborhoods of Ipanema, Leblon, Vidigal and Copacabana, as well as see Christ all at the same time.

As I mentioned, Ipanema is a hive of workout maniacs. During the summer (also in Leblon) there are free gyms mounted on the edge of the beach. There are also permanent muscle workout stations that are public and you’ll see scattered around the whole city. You should really get yourself some gloves to use with the equipment because its metal and can sting.

Alternatively, one of the newest and rocking sports is beach tennis. You can find schools along Ipanema beach and they cater for all levels. My teacher spoke some English too, bonus! Imagine all the workout of tennis, but on sand.

That makes for one firm booty.

This is the neighborhood to chow down on world class French cuisine. Everyone loves Brazil and the French in particular seem to migrate towards this tropical country. Consequently, French restaurants are authentic, delicious and maybe quite pricey.

In fact, even Master Chef Brazil, has a French judge (another is Argentine). They put subtitles because of his accent, but his Portuguese is on point.

Anyway, the best French restaurants in Ipanema are: (all subjective of course)

L’Entrecôte de Paris Ipanema: famously only has one dish, a steak, with super secret 17 ingredient sauce, and served with salad and French fries.

Le Vin: which is a restaurant set up in one of the old mansions of Ipanema. Great wine, amazing octopus and always full.

Some would send you to the ultra busy, nightlife central Lapa, but Ipanema has some of the snazziest bars in town.

Jack Daniel’s Rock Bar is newish, with a crowd of stunning locals and a balcony that overlooks the Lagoa de Rodrigo Freitas.

Barzin is a bar on the lower floor, which also serves food and upstairs becomes a sectioned off nightclub.

Blue Agave is really just a tiny Mexican bar that sells snacks, but foreigners seem to gravitate there. The revellers pour out onto the street.

7. Dine in Front of the Lagoa

Moving away from the beachfront is Bar Lagoa, which serves German food, altered a little for the Brazilian audience. The view of the lake is enough to woo you, but I have never been to this restaurant when it wasn’t packed.

Don’t forget to bring mosquito repellent, you are by a tropical lagoa.

8. Munch Down on Street Food.

In the evening, the street food vendors appear from nowhere, to populate the beach sidewalk. You can get yourself a whole meal from what’s on offer and it gives you an excuse to wander along the buzzing beachfront.

Corn cobs that are boiled they smothered in butter and sprinkled with salt. The corn is not sweet like we get in the UK, it is a whole different variety, but it goes great with this delectable mixture.

The Spanish pastry is very common on Brazilian streets. You can choose to fill it with doce de leite (condensed milk) or chocolate. Then you could workout on the beach!

You’ve not seen anything like a Brazilian hotdog. They give you the standard dog in a bun and then there is buffet of toppings. You can have them all… though it may spill over a little. Most common is to put mayonnaise, those thin chip sticks/crisps, sweetcorn and quail eggs. You read it right, quail eggs. Chic as hell.

A gluten free pancake made from the flour of the tapioca root. This is typical from the Northeast and you can fill with savory or sweet choices.

9. Be a MASSIVE TOURIST (it’s ok, I took my parents here once)

The restaurant takes its name from the song, Garota de Ipanema and is great if you want to see all the cheesy tourist stuff and eat actually pretty great Brazilian food.  The restaurant has open windows all around the corner restaurant so without fail entertainment touts will arrive during the night to serenade you.

Either it is live samba music parading around the restaurant or a capoeira gang who perform mouth-dropping stunts. The capoeira guys sometimes ask volunteers to stand and a hefty athletic man literally somersaults over your head.

The food is not too bad as long as you opt for the grill yourself picanha. They’ll bring out a metal grill with a gas fire underneath and raw meat that you can cook yourself to your preference.

Finally, since Arpoador is an alcove protected by a jutting out rock, it is on this beach the surf schools congregate. It is great because there a steady waves that don’t tower too much over newbies. When I am watching from my Arpoador rock after my morning jog (number 3) the majority of the learners are kids.

What else do you like to do in Ipanema?