A Lazy Sunday at the Jockey Club Rio de Janeiro 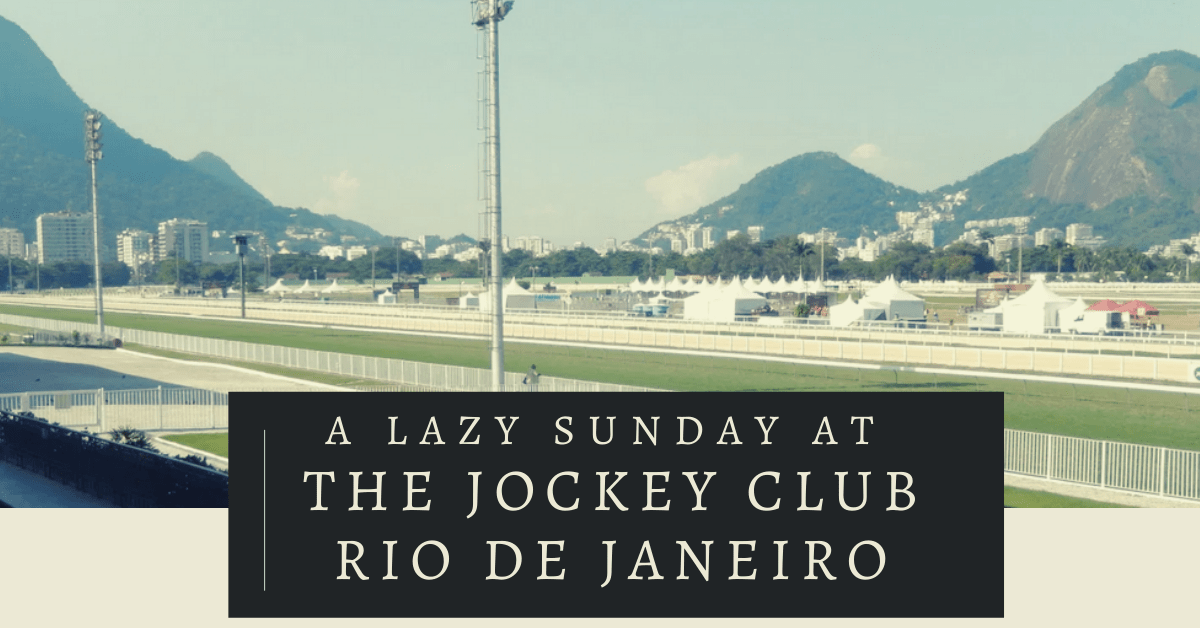 Jockeys are on average no taller than 5.3 feet, though usually several inches shorter. It’s a career I could go for if it weren’t for my chocolate gut teetering me over the edge of the weight limit. Traditionally the Jockey club Rio was where the aristocracy would go to egg on ‘thoroughbred’ horses. Splashing their jewels betting on which horse would pelt over the finishing line, bouncing jockey still in tact.

The Jockey Club Rio de Janeiro was founded in 1932, less than a hundred years ago. It is perched in arguably the best spot in town. A glorious view of Christ, paces from the regal botanical gardens and on the shores of the Rodrigo de Freitas Lagoon. What’s more is it boast options for those not only interested in horses.

Everyone loves choice, we feel powerful.

I’m going to run through the club’s highlights and exactly how you can spend a Lazy Sunday in Rio de Janeiro’s jockey club.

By the way, it is Poppa Markham’s top spot and this is a guy who’s seen the inside of hundreds of airplanes.

At the start of the 20th century Brazil was goooning after the Europeans by shipping in the English horses and contracting French architect André Reimbert to design the new Jockey Club Rio.

In the beginning there were two teams: The Derby Club and the Jockey Club. Like fantastic team players they negotiated alternating use of the new jockey turf. Everything was dandy in Horse Racing land until the truth hit town. Their fancy architect had sucked their funds dry, and the mounting debts meant team ‘Jockey Club’ broke the treaty. Team Jockey began using the turf every week. Things were turning sour until bam one day they found the solution.

Marrying together into super team of Horse Riding groupies, they solidified the relationship and became one, the Jockey Club Rio. Therefore, this fantastic horsey playground was officially opened in 1932. Since then it has held horse racing every week and evolved into the perfect place to spend a lazy Sunday in Rio de Janeiro.

Hold your horses: Hacks for the Jockey Club

Men, leave those shorts at home. No, don’t let it hang loose. LORD NO. To gain intimate access to the not-so-secretive Jockey club (yes I spilt the beans) you need to fashion long Johns. Save your pins for the beach this is a “Gentlemen’s’ club.”

I know how it sounds.

Charlotte, do you want me to burn up into a puddle of over-heated tourist?

Fret not, Poppa Markham already swindled the system. He got himself those zippies. Zip the trousers on and off and ruse your way past the fierce looking Jockey club trouser police.

I love my Flip-flops as much as the vitamin D-deprived Brit, however, try and sneak your pale toes past the flip-flop cop.

Smother yourself in insect repellent. Shiny, shiny skin is all the rave in Brazil. One time I booked my sister into an Airbnb that I can only describe as a crazy Argentinian’s mosquito-breeding sanctuary. The guilt I felt when I saw her little chicken pox morning face, is branded in my mind. Trust me, shiny is the new not spotty. Or anyone you see who is not a shiny mosquito repeller is soon to become a homosapian on spots.

That means keep your eyeballs on the road or you will be locked up as a cat-killer.

Just kidding, that won’t happen, but your soul may indeed be doomed.

Out of some mixture of irresponsibility and heart-warming compassion the jockey club has morphed into a cat sanctuary. Bunnies I know have bad reps, but I’m telling you, cats are not that far behind.

There be cats everywhere on the Jockey premises, so save their little button noses and drive like a snail.

Superb. How many friends you got?

Wow, I didn’t know you spoke Portuguese. You kept that one on the sly Frank. You just guaranteed yourself a place to spend your Lazy Sunday.

How the horse racing works

Firstly you can try your luck at betting. I believe you should really have some insight on the horse scene if you are truly thinking of splashing the cash. We bet 10 reais on some rather funnly named sprinters: Breese (spelt exactly like that); Very Best Friend; Saí da Frente (Get out the Way). Suffice to say we won nothing except pure joy of yelling these names at the top of our lungs.

To bet you have to head inside the main building. The entrance is on Praça Santos Dumont, 31. Gávea, directly opposite the botanical gardens.

Eat like a Horse – Restaurants in the Jockey Club Rio

There are a staggering eight restaurants on the Jockey club Rio grounds. I admit, being a humbly low earner/ saver I haven’t tested them all. You can check the Jockey website for a complete low-down (I apologize for non Portuguese speakers). The restaurants I have tried, however, each hold something a little special in store for you.

The entrance of Prado is directly opposite the Botanical Gardens. From the outside Terrace area you can watch as the horses are cat walked along the side of the restaurant.

In terms of food, Prado Co. specializes in Brazilian bbq. By BBQ they mean meat so just choose any of the options and you’ll be satisfied. It’s worth noting that most of the dishes are priced for two people sharing. I’m big fan of this option because I believe you get more food for your pennies. I would even venture as far as saying the dish can do for three, but I don’t know your stomach and you don’t know mine. Trust your gut!

At last, accept the sausage. Brazilians are leisurely eaters, but also equally demanding and want to consume ALL THE TIME. So as the horses are strolling past you and you are balancing out how much of your small fortune you can truly bet on a horse called Sir Lady Killer, the kind waiters will wander around with sausages on a stick that you can nibble on in the hope that your dinner will make an appearance soon. They are actually really quite delicious.

The Restaurant Rubaiyat is a Latin American Giant opening branches in the most prestigious cities of the world. The original restaurant took its name from the tree planted in the centre of the restaurant called a banyan(ficus benghalensis).

Their slogan is good quality ingredients sourced from only the top dogs. We are talking a net that spreads from Argentina to the top reaches of the Amazon. They are not frugal with their ingredients and thus neither are their prices, but if you are searching for experimenting the best of the best, be their guest.

With influence comes the choice of probably the best views in the Jockey club Rio. You’ll  feel the rush of wind as the horses race past just in front of the veranda and be able to humbly gaze up at the Christ Statue, who surveys the city of Rio de Janeiro.

Other Posts You May Enjoy

10 Alternative Things to do in Rio de Janeiro

How to See Rio on the Cheap

Guide to Ipanema and Guide to Copacabana