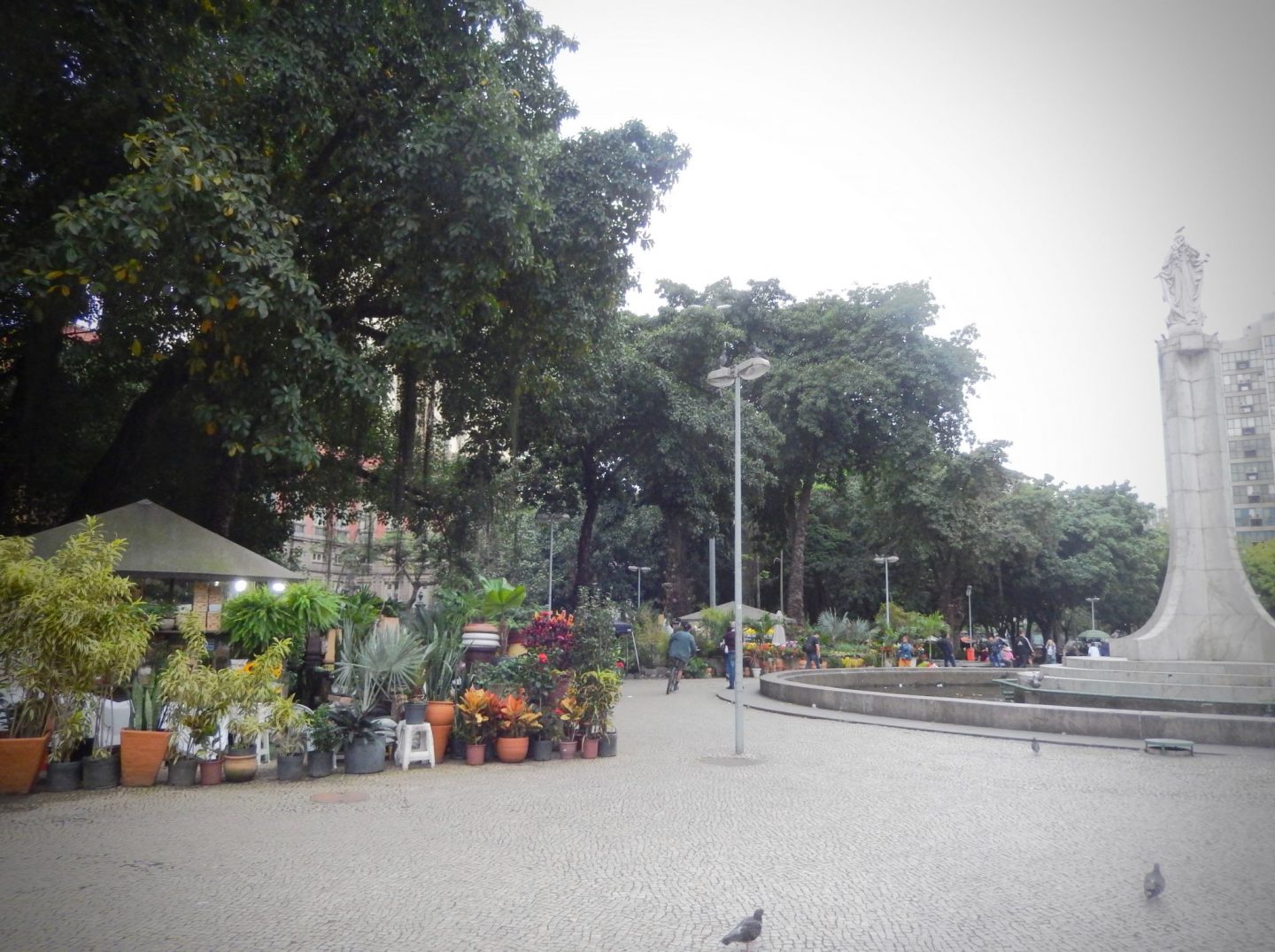 Often overshadowed by the glossy beaches of Ipanema or Copacabana, the previously royal neighborhoods of Largo do Machado, Laranjeiras and Catete offer history and a more “normal” day to day life. When the pale look was on trend, the Portuguese court would seal themselves off in the grand mansions in these districts.

Largo do Machado is a neighborhood completely contained in a square. Though, it is one busy square.

A panaramic view will show you fruit vendors, gaggles of old men playing chess, exotic flower stalls and the country’s bargain-price supermarket, EXTRA. Trust me, you want to get your groceries here.

Also, they have a system of promotions that are announced on a loud speaker. Whatever the product, clients then flock to the counter to pile high the discounted items.

Laranjeiras, which means “Orange Trees”, was a noble neighborhood where the Portuguese courts liked to hang out to protect their pale pale skin from the blazing Brazilian sun.

You will find some of the old colonial palaces, like Guanabara Palace where the governor of Rio de Janeiro works his little socks off (most likely… on Mondays, maybe even Tuesdays).

Originally it was home to Princess Isabel the daughter of Dom Pedro II (and the badass lady who finally abolished slavery legally in the world).

Nowadays, Catete is a little downtrodden. However, when Rio was capital of Brazil, the presidential palace was located here.

It is jam-packed and lined with street stalls. So, a great place to soak up a Brazilian atmosphere. Get a load of the numerous street food sold from the moving carts.

As previously mentioned, the ex-presidential palace is now open as a museum. To make the most of the visit you should read up beforehand, but the highlights are:

Furthermore, behind the palace there is an independent cinema and a park. The park is lined with imperial palms, that stretch high to the sky. From time to time there are book fairs, live music recitals and kids clubs/ shows hosted in the grounds.

Brazil is almost completely built on immigrants and one huge flow was from Syria and Lebanon. Therefore, the Arabic cuisine has justly been absorbed into Brazilian culture.

In Galeria Condor, just off Praça Largo do Machado, you can find a bustling Arab restaurant called Rotisseria Sírio Libanesa.  Split into three sections: sitting, standing with a high table, delivery/ takeaway. Take your pick depending on your mood.

Inside this mini shopping centre there are several quaint shops. My pick is  the cute prints of Sugar Loaf on t-shirts. You will find these stores right by the entrance.

For those who are interested in the construction of the city of Rio de Janeiro the Instituto Pereira Passos is responsible for urban growth study or public policy like the UPP projects.

It is also therefore a great point of contact for students studying any of the Favelas.

Those just passing through, however, can take advantage of the local book store. It stashes beautiful photography books on Rio and Brazil in general. As well as books exploring Brazilian public policies, sociology and political issues.

In Rua das Laranjeiras the old the rustic  Mercado São José homes a cluster of hipster eateries and bars. An unpretentious mixture of food choices and craft beers.

The great news is it is dress down and sheltered from the rain. Therefore, when the tropical rains bear down this is a perfect option. Sometimes you’ll even catch live music.

Searching for a quite spot to just breath? Vila do Largo is an alleyway, I know sounds dodgy, but in a quaint kind of way. You will find this Vila in Largo do Machado.

The backstory goes that the 36 houses were put on the market, however, three weren’t sold. This impeded the demolition of the vila to build a new commercial building.

Eventually an architect stepped in a revamped the deteriorating alleyway.

Currently it hosts various co-working spaces. These are the new 9-5, so here you can buddy up and connect with other digital nomads.

Also, “Casa 8” brews its own coffee ground coffee. No fuss service, where no tips are necessary and you pick up and drop off your coffee cups at the counter.

Finally, browse the ateliers and art galleries for local souvenirs.

A drinking hole in all its might. This square brings together a whole bunch of botequins (the good and the ugly). Though the diversity of the square makes it stand out. Anyone fits in.

Brazilian laws allow free drinking on the street. This gives the choice to pack your own booze picnic or just purchase from the local supermarket or stores. You’ll have to make buddy up with a bar/ restaurant or use of a toilet mind…

On Sundays the group, “Arruma o Coreto“, put on a cracking Choro recital.

Also, during Carnival in February/ March Praça São Salvador holds a “bloco.” Basically, a giant gathering of people, most likely in fancy dress, day drinking in the street.

Although you need to be member or enter as a member’s guest, it is worth mentioning Fluminense Club.

An olympic size swimming pool, 4 clay tennis courts, shooting, volleyball, a football pitch the list goes on and on. It is true Rio is scattered with class clubs, but usually they demand an exhaustive deposit on entrance. We are talking your house deposit folks.

Overall, my favorite part is you can often see monkeys springing across the fences whilst you play tennis. And a couple of times I even spotted toucans!

Lastly, at the back corner of Laranjeiras the  Parque Guinle offers a cosy hideaway. A fresh spot of tropical greenery overlooked by the Governor of Rio de Janeiro’s residence.

Originally, the park used to be the gardens of the Guinle Palace, where our Governor lives. Though thankfully everyone can appreciate the beauty nowadays.

More in our Rio Neighborhood Series