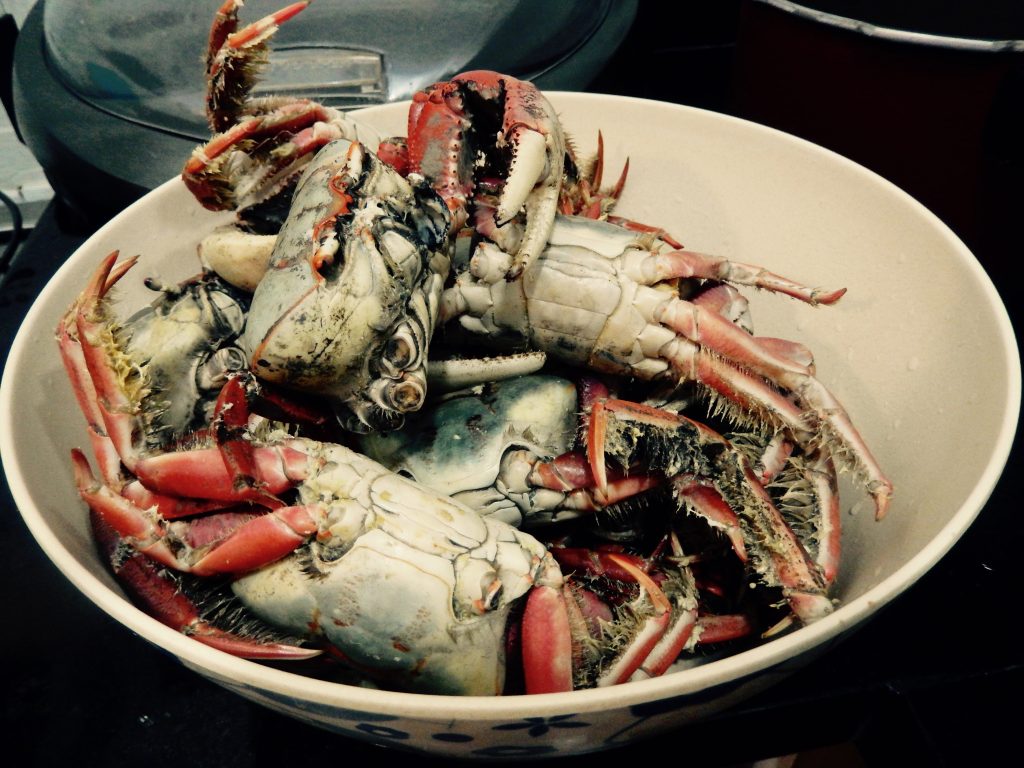 Eating crabs is a messy eater’s worst nightmare. You can spend an excruciating 45 minutes cracking open a plate of crabs, just to munch on the tiny morsels of sweet crab meat encased within. Cooking crabs is even worse.

In Brazil, crabs are on the menu in most of the coastal towns along the vast shoreline of the Atlantic Ocean.

I had my first taste of real crab in the town of Porto de Galinhas (Chicken Port), a name originating from code words used in the slave trade.

In avoidance of taxation the clandestine trade of slaves was elaborated by transporting the slaves along with Guineafowl. Thus, the common question “ are there new chickens in the port,” (Tem Galinha no Porto?) would be a way to decipher the arrival of new slaves.

Anyway, in Porto de Galinhas I chowed down on my first glorious fresh crab. None of those sushi crab sticks malarky. The type where you see there beady little eyes in the tub and 45 minutes later they are floating in a broth of coconut milk.

Don’t hate me a girl has got to eat.

Perhaps I was too engrossed in hacking open the shells, whilst simultaneously trying to dodge the splay of coconut milk that not only hit myself, but surreptitiously sprayed the backs of fellow diners.

Had I studied my partner’s expression, I would hazard a guess he looked to be contemplating.

His brain was a ticking.

A plan a brewing.

Back in Rio de Janeiro early Sunday morning you can hear a caffuffle outside in the street. A man with a trolley howls outside the window. His cart is jam-packed with squirming crabs fresh off the mangroves about 2 hours outside the city.

Then he paces the streets yelling out Carangueijos Frescos – Fresh Crabs.

Of course, it’s a sight to behold. After gawking out the window I briskly shut it and lie back into the cooling air-con breeze, munching on my fresh strawberry smoothie. Life is good. Life in Brazil is unexpected and life is great and safe when peering from behind the window.

Cooking crabs belongs to the experts. A friend of mine told me she knew a friend of a friend of an acquaintance who was eaten by a crab in Alaska the size of a hippo. That is the stuff of nightmares, but I also have a gruesome tale. A tale that will make you worship those eateries that serve up fresh crab.

A tale of just how love can be expressed in a number of erroneous ways.

What springs to mind when you imagine Brazil?

A stab in the dark says some tiny bikinis, pineapples and bananas, beach, big butts and a whole lot of hot football players.

Dark, tall, Latino lover with a sexy accent and a cheeky, charming demeaner?

You can certainly find all those things in Brazil, though daily life encompasses far more football hooligans, long queues, poverty, overpriced petrol and mandioca chips. As for my boyfriend he is all those things, but also, he once turned up at my door not brandishing a bunch of flowers, but instead two strings of distressed crustaceans. And I was the one to cook the poor devils.

I looked at them.

They looked at me.

We all knew this would be a sad day.

Except of course, my grinning Latino, who was beaming back at me like a happy puppy who had achieved the apex of romantic gestures.

Still strung up our squirming dinner went unceremoniously into the sink.

It was a squabbling of claws, quite possibly mixed in with my own tears and 10 minutes later we have 20 squeaky clean crabs.

Next step on cooking crabs, as google informed us, is to drop your spotless crabs in a boiling pan broth.

Neither I, nor my excitable partner could bare boiling anything alive. Hence, we turned to the only alternative. We are about to have a solo Star Wars moment, except considerably decelerated.

In a rather dangerous manoeuvre we dangled the crabs into plastic bags and stuffed them in our freezer.

During the next two hours I would periodically peer around my freezer door to see limbs flailing slower and slower each time I looked. We should have put on our big boy pants and boiled them, this was a stressful death for all parties involved.

Lesson From This Taxing Crab Tale?

To begin with let me highlight that trying to predict what a foreign fantasy life will be like from gossip, movies and stereotypes is a blunder. Sometimes you may be disappointed like when I believed I would be teaching English to the hundreds on the beach, tanned, wearing flipflops, darning braids and rubbing shoulders with the likes of Carmen Miranda’s descendants.

However, on the other side your life will never be a bore.

There’s magic in the unexpected.

And finally, after my traumatic experience in cooking crabs, now every crab I eat in a restaurant will be a justified, delicious and appreciated crustacean, unlike those poor souls whose last views were the inside of my freezer.