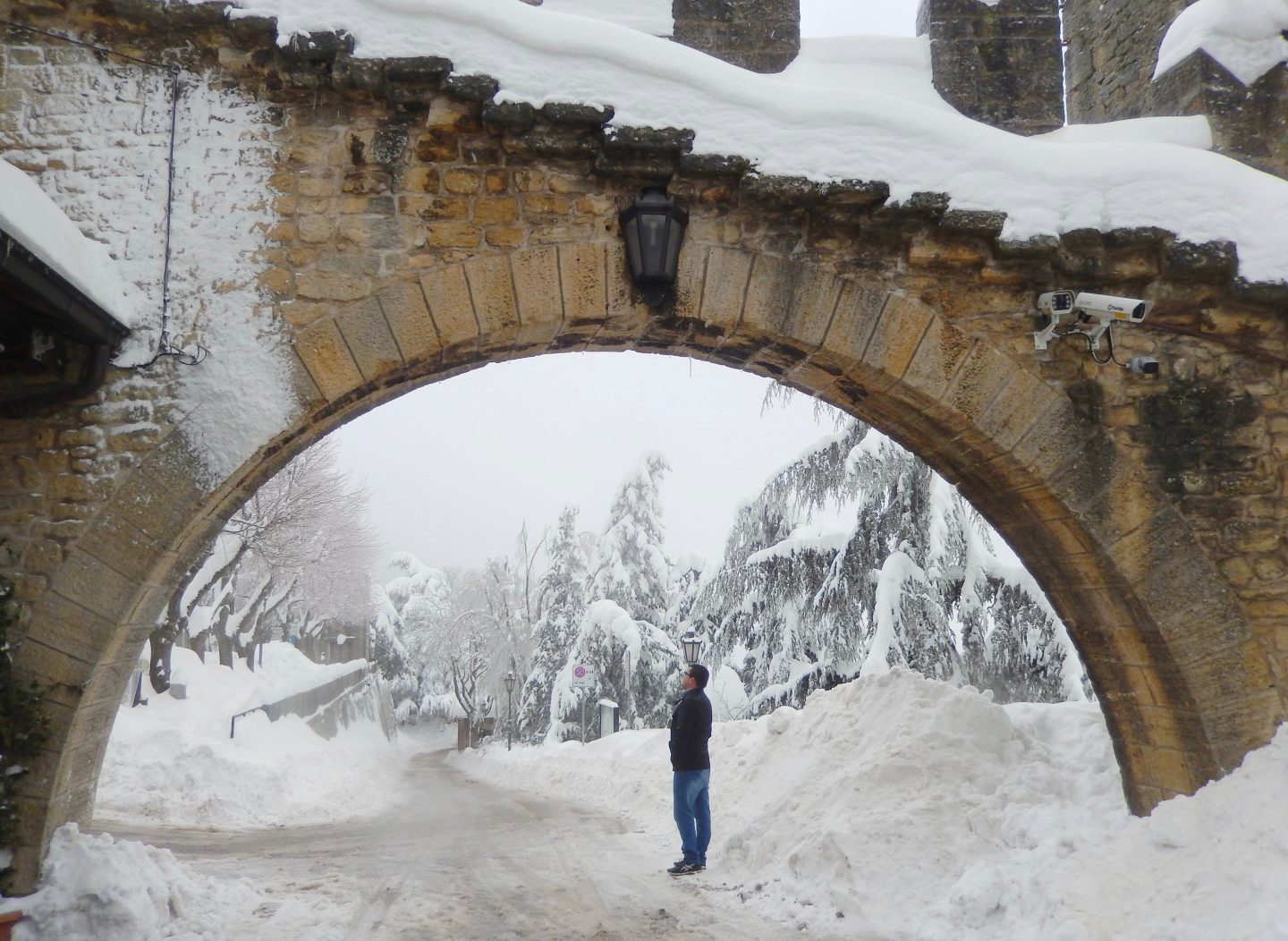 Our latest, eventful romantic jaunt took place in the independent city state of San Marino and it’s a cracker. This tiny country dates back to 301 AD, when a Croatian stonemason took to life as a monk amongst the clouds and founded a church plonked on the top of Monte Titano. Since then, the country, completely enclosed by Italy, has calmly defended its independence, now offering a calm retreat from busy life.

In light of such inspirational defiance, we decide to dedicate a weekend there in the beginning of March for my fiancé’s looming birthday. The big 3-1.

What could be better than retreating into the mountains and what could possibly go wrong?

So we set off with a very loose plan. A car and a hotel and the knowledge that San Marino lay somewhere north of Ancona. That was when the snow storm, that had seemingly retreated to Russia, came back with a vengeance.

The Beast from the East – A Snowstorm that Lingered

The Beast from the East hit, though in our town in Southern Italy most of the snow had already melted. We hit our first hurdle when the car rental company refused to rent on a Brazilian license. She wanted the international translation, what a kill joy.

Onwards and upwards, I step in behind the wheel.

I’ve barely driven for the last 3 years of living in Brazil. My calm affirmation that I will take on the task of driving says I am a held together 25-year-old. My face behind the frosted up windshield says “someone save our souls”.

I’m chuntering along the motorway in the slow lane, some (in the passenger seat) like to name the loser lane. Glancing fearfully at the snow in the surrounding fields and I watch helplessly as the white ominance begins creeping inwards. It was like one of the old horror movies, where every time you blink the snow inches forward. Maybe I’m taking it too far to say it was my own “weeping angel” episode of Doctor Who, but that is entirely what it was. A snowy nightmare replication where the Weeping Angels are substituted by a relentless snow storm.

Blink and the snow has drifted just 2 inches from your car wheels.

We Continue on Foot

Eventually, we start the incline towards the hill where San Marino sits. Its highest peak reaches 2,457 ft above sea level, and towers above our little citron.  Meanwhile, I am trembling behind the wheel as much as the car is shaking on the ice. We have no snow chains, the result of a stubborn standoff, on principle, with the rental lady. In hindsight we were only ever going to be the losers. After my 5th attempt at the climb we decide to pull up and continue our pursuit on foot.

This is our Frodo and Sam WiseGangie moment. On to Mount San Marino little hobbits.

I am collecting the provisions for a walk that google says will take an hour in now -2 degrees.

Then I hear a bang.

I turn to my left and Henrique has disappeared. Horror movie part 2 when you turn and another person has been grabbed to leave you alone.

You know you are next.

It’s everything you fear will happen after that one time you watched a horror movie when you were 12 that your mum told you you weren’t allowed to watch.

In the pitch black outside I then notice some tangled feet. I peer over the side of the car and Henrique has bailed epically. Outside is a ruddy ice-sheet. Not just slippery sections of frozen snow, but the entire floor is a piece of ice and we are only wearing rather holy running shoes. As the temperature has slowing dropped, the rain has solidified into a thin layer of ice on top of the previous snow storm. The plan is now impossible and we trundle the car back down to a random hotel carpark.

One taxi driver gets us after an hour at the price of approximately half a leg.

As we finally begin to make ground in the confines of a snow chained car, we see the outside transform into a magical Narnia. There’s some people sledging in the street and it feels like an American Christmas movie. We alight the vehicle feeling light and enter the walls of the city of San Marino.

Our phones then swiftly turn off to never show google map directions again.

Now we are at 22pm, -4 degrees and lost in a snowy wonderland.

I watched as my boy trundled through the snow, wet feet, rapidly dwindling aspirations for his birthday weekend. Ironically, for his birthday I had bought him a portable power pod to charge his phone from anywhere. Sadly, I didn’t charge the damn thing. A useless deadweight. This is one of those moments of despair.

I would have been a hero.

The tale ends after half an hour of idle walking in the ghost town centre we stumble across some teenagers that steer us in the right direction of our hotel, which is obviously hidden up an alcove. We scrabble unceremoniously up an icy slope to fall into the arms of our concerned hotel owner. I had tears in my eyes.

We spend the next four days stranded in the idyllic fairytale city of San Marino. Drinking, searching for food (most restaurants had shut up shop – no one else had attempted the feat that we did), and warming our icy toes that were constantly soaked through because of our inappropriate footwear.