Taco Bell Ruin and 7 Other Lessons from the USA 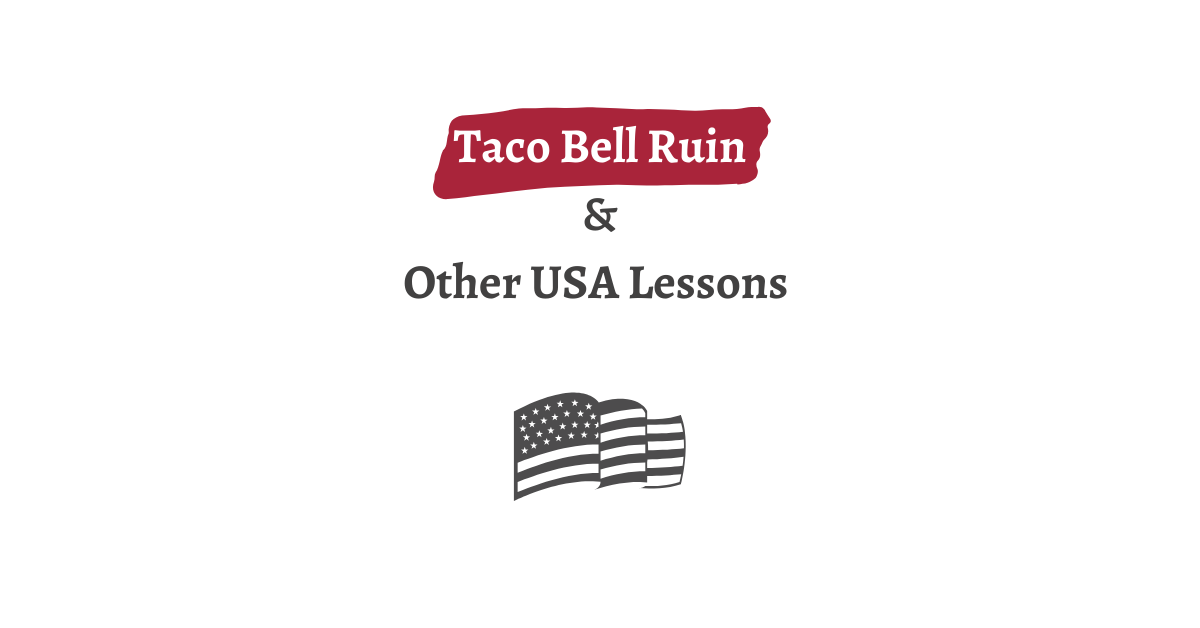 After one year at the foothills of the Colorado Rockies here are 8 USA lessons and how we learnt them.

We’d never tested how far the car could go once the fuel pin had dipped below zero. It turns out not that far.

I’m from an island. A floating hunk of land where 66 million people are crammed together. We don’t run out of petrol because you can barely drive 10 minutes without hitting the next town. In the US however, the expanses of desolate land are boundless.

Wyoming could fit the entire British Isles inside it, but has a population of just over 1/2 a million. If we spread out the population of Wyoming evenly throughout the State, each person could fit 1872 school buses between themselves and anyone else.

When you drive past a sign that says no gas 100 miles, it also means to say no signal or civilization for 100 miles. You are quite possibly about to risk your life.

Last Spring, we drove to New Mexico to camp in the Rio Grande Canyon 5 hours away. We slept in our steamy jeep, listening to the howls of cayotes out in the wilderness. Not a streetlight or running tap in sight.

As we glided along the stretch of road on the end of rural Colorado the car stuttered to a stop. We’d ran out of gas. Simultaneously the signal on my phone flickered hesitantly. Our 24-hour road assistance now useless.

As it was daytime we were in luck and picked up by a couple of corn farmers. They whisked Henrique and our friend away in a scenario that describes everything that Hollywood movies tell you not to do.

Thankfully, after a ½ hour of twiddling our thumbs they returned yielding petrol. We learnt from our rescuers that people still hunt with bow and arrow in the US. We learnt from experience to pay close attention to road signs.

USA Lessons: read the road signs, when it says no gas for 100 miles it means it.

Our first and last Taco Bell experience happened the week we arrived in Denver.

Taco Bell is a Tex-Mex where the dish arrives 3 minutes after you order. The definition of fast food in the country that birthed it.

We ordered haphazardly with no real expectations of what would turn up. Unable to discern the name mumbled by the attendant as well as being the only customers in the branch, we tucked into the food that arrived on the counter. Then another plate materialized, and the lady shouted my name. We duly grabbed it and munched away on the tacos.

Within 30 seconds a biker with enough tangled facial hair to hide a small bird, strode in. There were raised voices. As we stared down at the four plates that surrounded us, we realized we’d been scoffing this enormous man’s Taco Bell.

We did not own up.

USA Lessons : you can pre-order fast food in USA. Don’t eat the food that appears on the counter even if you are the only customer.

3. The art of tipping

There is no art to tipping you just pay a hefty 20%. We were told that waiters are paid less than minimum wage with the expectation of the company that tips round this up to something resembling legal. It’s a poorly thought out system, but it means the 18-20% tip is a necessity in restaurants.

If you pay by card, the waiter will take the card away. Yes, out of your sight. Then bring back a receipt with a place to write the tip and once you leave apply the extra tip to your card.

Fahrenheit is an imposter. Precision has nothing to do with it. It’s a temperature masked in multiples of 10 because these are definitely the only phrases I’ve ever heard.

In the USA they legit let you put your food scraps down the plug hole. I had always wondered why the Flintstones had a little dinosaur living under their sink and why Fred Flintstone would have to pull a fork out of its throat. It was a prehistoric garbage disposal. A veil has been lifted!

In American kitchens there are little black flaps around the plug hole and once something disappears through there is no return. It is magical and North Americans should be applauded for it.

USA Lessons: on the 8th day Americans created the garbage disposal and it was good.

6. A weird relationship with alcohol

Once we took a university road trip to Salt Lake City, Utah. It was epically far right through those desolate lands littered with sporadic and unexplainable houses. In the evening we’d go out for drinks with the group.

In Utah the law states you must purchase food with your drink. Yep, every drink. We were inundated with nachos. Swamped by bread baskets. Besieged by French fries.

These other things happened too:

In Colorado I once saw an intensely balding man be asked for identification.

In Colorado, Utah and New Mexico you have to go to a separate shop to buy hard alcohol.

There can be no open beverages in a moving vehicle.

USA Lessons: American lawmakers fear alcohol and it doesn’t make their citizens any less of drunkards.

Ever heard of cachaça?

Banned in the European Union, hot chili lime Cheetos have a dark secret. Once I open them, I can’t physically bring myself to stop. Even when my mouth is numb from the sheer heat there is an additive that compels me to keep shoveling the family size bag down my gob. Witnessing my relationship with a bag of American Cheetos is ghastly.

I have cooked the bags of frozen buffalo chicken wings, baked the ready-made Mac and Cheese, warmed up a breakfast burrito and all to the same avail. An inability to stop eating resulting in subsequent disastrous bowel movements.

USA Lessons: in the US fresh is best. Don’t even set foot in the ready meal aisle.

Bonus lesson: the European Union defends us valiantly from the e-numbers of your nightmares.

Americans are extra. Not in a necessarily bad way.

The price on the tag is not what you will pay. Most people know this, but I thought it is worth reiterating. Though, honestly it only matters on the big stuff. Like when I bought my wedding dress and the tax was $80. $80 EXTRA DOLLARS. In general you won’t even notice the added tax.

This happened once with a group of us.

“Guys, my friend told me that only Americans put happy in front of the names of the days.”

“what!” an indignant chime rings around the group.

Everyone turns to me.

“erm… you guys are upbeat.” I offer with a half smile.

“There’s nothing wrong with being upbeat!”

Nope, there isn’t. And it can often be refreshing.

USA Lessons: Americans and their tax are extra.

Any more lessons from the USA?

The Perks of Marrying a Foreigner

The Holy Grail of not sucking as an Expat