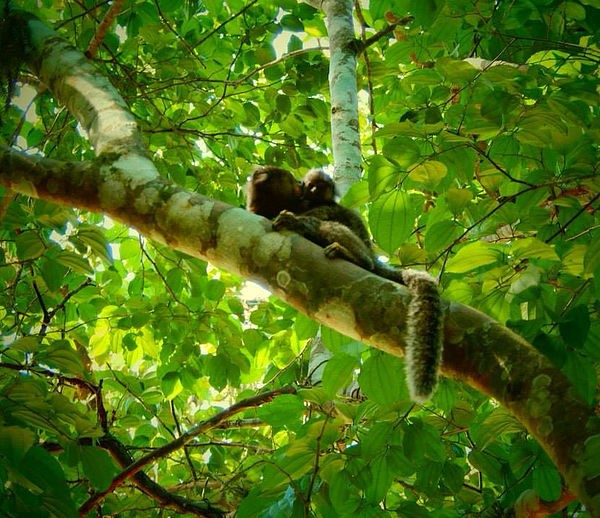 When I first arrived to study Rio I was sure of two things: it was hot, and I was going to be fending off monkeys on a daily basis. Alas, a whole month passed until I encountered my first entourage of monkeys.

And I was on the look out.

The only wildlife I had seen at that point was a single rat that made a suicidal dash across Leblon beach and whose life ended by an extraordinary, well-timed blow from a metal rod wielded by one of the boys that rented the beach chairs.

I’ve seen the Rio monkeys and I know how to track them too.

This is one less known by tourists and it has never disappointed. Duque de Caxias is a fort that sits at the top of the hill at the end of Leme beach (Copacabana). You must walk to the front of the military village in Leme and pay R$4 (US$1) to enter. Once in, follow the tarmac path that winds up to the top of the hill.

The perk of this trek is it’s exceptionally safe because it’s located in the grounds of a military barracks and it offers you a unique viewpoint of Pão de Açucar (Sugarloaf Mountain).

Trek Level: low difficulty, less than 30 minutes to the top and not particularly steep.

To be honest, you could take your nan to this one.

The botanical gardens in Rio are Momma Markham’s (Aka my mum’s) favourite spot. A breath of fresh air in the centre of a busy city. Make a whole afternoon of it and don’t forget to take mosquito repellent.

Highlights include the orchid greenhouse, the bee hives and the giant lily pond.

I have a well-founded fear of stinging insects. The combination of yellow and black stripes gives me a flash back to my 3-year-old self pinned down as my mum’s best friend extracted the bee sting from my swollen bottom lip.

Bees in Rio have no stings! There is hope in the world yet.

In the Rio Botanical Gardens you can nosey right up to the hives.  One bee is called the dog bee, named because it will follow you around. You can waft him away, but he’ll just keep buzzing back to you like some sort of fuzzy boomerang.

(Daily from 8 am to 5 pm, but closed on Wednesday)

Top tip: Take an empty water bottle to fill up at the drinking water taps located around the park.

Parque Lage is a free-entry park next to Jardim Botânico. This park is smaller, but you have the opportunity to see two types of monkeys!

The most common monkey in the Mata Atlântica (the forest found in Rio de Janeiro) is actually a marmoset. Known in Portuguese as mico. In Parque Lage you may also see the Capuchin monkeys (macaco-prego). There are 118 species of monkeys in Brazil, the largest number found in one country, though there are approximately 5 species found in the Mata Atlântica.

In the park there is a restaurant, picnic areas, a teeny aquarium in a rock, and a weeny piece of castle (that’s where you’ll see the brides – see warning).

Trek Level: In general flat, well-paved park, but there is an option to trek to the Christ the Redeemer Statue. This trek is a mid-level difficulty.

Sugarloaf Mountain is definitely on your list, but I’m gonna throw you a curve ball and suggest you skip the cable car.

I confess the trek can only reach the first cable stop on Morro do Urca (Urca hill), but this trek has exclusive views most visitors won’t see.

Access the trail for free via Praia Vermelha. It’s about a 40 minute hike with a few steep stretches. You won’t have to scramble, but your calves and quads will ache.

Like the first trek to Duque de Caxias, Urca is a military island. You will be safe to hike here. Last time I embarked on this trail I saw a rare species of toucan with my brother right in the middle of the city!

On Morro da Urca there are shops, view points, seating, shade, toilets and a rather up-scale restaurant. I promise you the next cable car stop on Sugar Loaf is no more special than this hike and you can spend the extra money on açaí while you are up there!

We are not all outdoorsy and Rio is tropical. It could rain your whole stay.

Restaurante Térèze is a high-end restaurant in Santa Teresa, where they hang pieces of banana and papaya on the tree trunks. This means monkey EVERYWHERE. Not everywhere, but definitely in the trees.

The little mites have caught on to an easy meal and come swooping down in family clans to feast.

Apart from this restaurant though, Santa Teresa is an extensive neighbourhood that borders the forest. Often wondering around you may spot monkeys dangling from the power lines, but unfortunately nothing is guaranteed.

Trek Level: Take a taxi to this restaurant. Or walk up Lapa Stairs and wonder around the neighbourhood (always during the day). The Lapa stairs have a medium difficulty, but you can take it slow.

Cost: cost of your meal

This is my disclaimer…

I am not Alan from Jumanji. I cannot conjure up monkeys. This is not a 100% promise you will see monkeys. However, if you spend enough time snooping around in these places they are sure to make an appearance.

Are you interested in Brazil? Head over to my quick introduction to Brazil post. The topics are broken into bitesize sections, so you can hone in on what really takes your fancy.