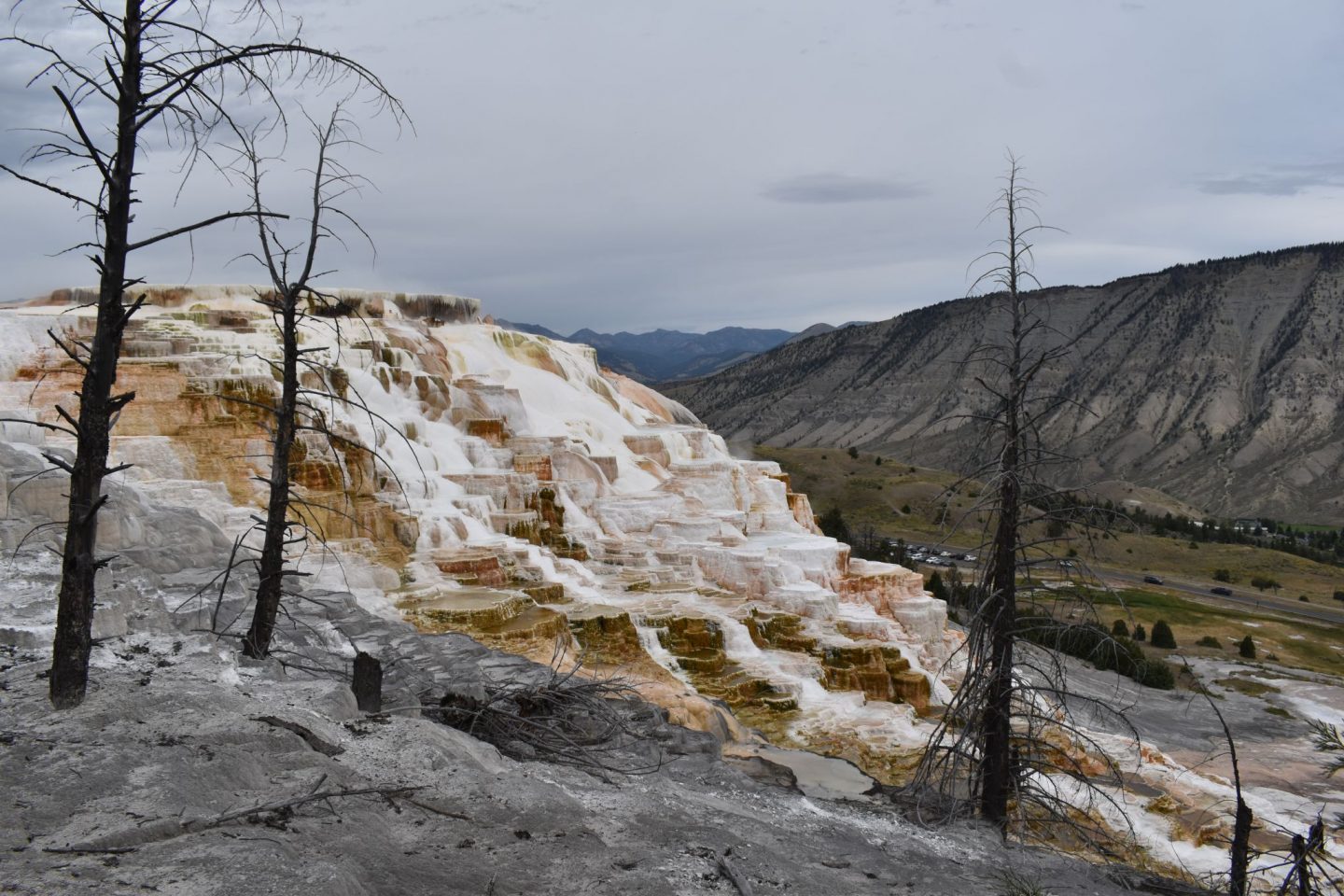 When I was a kid, we took a trip to Yellowstone National Park on the tail end of one of my dad’s business trips. I have vivid images of clutching my 3-year-old brother’s hands convinced that he’d launch himself of the boardwalks and dissolve in the boiling Sulphur water. It’s a unique part of the world, where you can tread just inches above million-year old hydrothermal features.

When we returned 20 years later the images came flooding back. This super volcano etched into Wyoming, Montana and Idaho is a landscape seen nowhere else in the world. It’s savage and prehistoric. Like scenes peeled out of the storybook Land Before Time.

Part of our Feasible Road Trips from Denver, Colorado in 6 hours a day or less series

Each region of the US mid-west is weaved from a complex amalgamation of history, geology and the immigrants it attracted during different eras. We’ll show you the best of Colorado and the towns marked and populated by the Gold Rush. Then Utah a region swamped in fossils and landscapes dreamed up from ski-fi movies. Moving up through the farms and planes of Nebraska and the Dakotas and Southwards to the adobe architecture of New Mexico (which only become a US state in  1912!).

We’ve been lucky enough to venture out of Denver in almost all directions and this is your short guide to 5 feasible road trips from the Mile-High City. Let’s begin with Yellowstone National Park.

When, Where, How Long to Visit Yellowstone National Park

The park is not open year round due to the snow. Within the park some roads open at the end of April, but everything will be accessible by the end of May. The busiest months are July and August. Don’t let that stop you if you’re restricted to summer vacations, there’s plenty of space for everyone.

There are 5 entrances to the park:

Northeast Entrance: the access to Lamar Valley where the meadows are your best chance of sighting wolves in the early morning. Open end May to mid October.

North Entrance: connects to Montana and is the only entrance open year round. However, you won’t be able to reach there from Denver year round, unless you take a momentous detour through Canada.

West Entrance: access to Idaho and West Yellowstone Village with many accommodation choices. We saw bald eagles in Idaho!

East Entrance: open beginning May to early Nov. It’s the way to reach Yellowstone if you won’t go to the Grand Tetons or Jackson.

Download the official Yellowstone map here. It will be your lifeline to pack in seeing as much as possible of the 3,500+ square miles of the park.

We stayed in West of the park, in Idaho. At this entrance there are plenty of budget motels and Airbnbs. Camping within the park books up early, as do the cabins. Find alternative options at each of the entrances.

You can drive up to Yellowstone National Park in 1 day. Driving from Denver takes about 8.30 hrs without stops.

Or you can split the drive in two. This option is great for stopping off in Jackson then driving through the Grand Tetons. If you are pushed for time, there is a small airport in Jackson. You can then rent a car from there to explore Yellowstone.

Your time spent inside the park can be between 2 – 5 days, depending on how thoroughly you want to explore. We would suggest reserving the following times for each stretch of the park. Bear in mind none of these times allow hiking away from the marked-out boardwalks.

1 day for the East Entrance of Madisson down to Grant Village. Here there is an impressive series of geothermal features, geysers and short boardwalks that will consume you for hours.

1 day from Tower-Roosevelt out to Lamar Valley and back down to Fishing Bridge. Stop both at Mud Volcano and Tower Fall.

1 day from Fishing Village stopping off for activities on the Yellowstone Lake and meandering down to the South entrance. On this route we spotted coyotes.

In the North of the park this is the oldest hydrothermal feature. It constantly spurts out fresh land and as you peruse the boardwalks you’ll see new landmasses encroaching on the wooden decks. It’s surprising how quickly new surfaces are formed here, when most of the planet only shows minute evolutions over centuries.

There are bison living throughout the park, but for a chance to see offspring and the large herds drive between Mammoth Hot Springs and Tower-Roosevelt. Don’t get out of your car. Don’t drive too close. Bison will stampede and maul and are often more dangerous than bears.

It’s only one of 10,000 geysers in the park, but it’s the most reliable one. At Old Faithful you can sit down and count down the minutes to the next explosion. It’s worth getting a seat near the front and waiting 10-15 mins for a fantastic view of this natural phenomena. The reliability is connected to the reservoir below the surface that fills with superheated water. Overtime the pressure builds and once it is hot enough the water transforms to gas and is spurted through the small opening. Read more about why Old Faithful it is so predictable.

Also, the gift shop at Old Faithful is the best in the park. Get bison and moose head magnets, Yellowstone park tiles, Christmas decorations, deputy badges and stunning photography. Helpful as you won’t have to crop out the tourists in your own snaps.

These are highly active pools, mud ponds and geysers that steam out sulphur gases. The ones that blew our minds were Grand Prismatic Spring, Norris Geyser Basin, West Thumb Geyser Basin and Fountain Paint Pot. Read more about these systems here.

The lifeline of the park, the Yellowstone river meanders through the East. It’s a completely fresh atmosphere against the dead trees and dangerous hot springs of the North and West. Be sure to pull up to see the waterfalls and stop along the meadows and rivers for a chance at seeing moose and deer.